Hailstones, rain and cold wind; in the North Pennines on the 28th December.  Honestly, who would have imagined such a thing would happen?
It was a beautiful morning as I headed out from Ingleby Barwick westbound to meet up with Steve “SteveGT” Steve and Dean “Deano” Dean for a day’s cycling.  There were clouds in the distance reflecting the sunrise, and as the day dawned the orange and peach colours over the Cleveland hills were spectacular.  I had allowed myself an hour to reach Morrisons in Darlington, which wasn’t enough time because Dean had clearly said “North Road Morrisons” – he had said it numerous times and it was only this morning that I realised it was the far side of Darlington, not the near side.  Route planning in my head, I joined the A66 dual carriageway at Yarm and put some effort in to cover the mile to the Hartburn turning as rapidly as possible.
The breeze was light but into my face as I pushed on to Darlington.  At one point I thought I could save time by using Sustrans route 14, but I was wrong.  I think it was Peregrin Took who said, “Short cuts make for long delays” and I was certainly tempting the puncture fairy as I navigated the drainage ditch Sustrans have humourously named part of the national cycle network.  Back onto the road was the sensible choice and I made it to Morrisons in time to have a baton handover with Steve.  That was the end of my contribution to the yacf LEJOG, I hadn’t moved the baton any further north but I’d enjoyed taking it sight-seeing around Teesside. 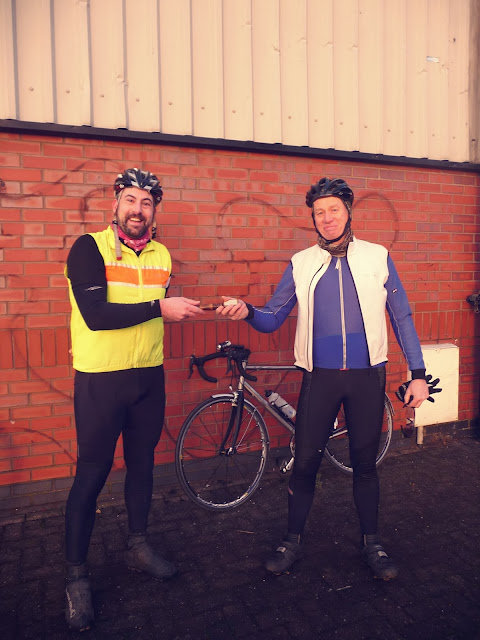 We set off together, Dean, Steve and I, through cycle paths and cut-throughs around Darlington thanks to Dean’s ‘local knowledge’ and we were soon on our way westward towards the Pennines.  I hadn’t thought to ask his plans beforehand so this was to be a mystery tour.  The lanes just west of Darlington were totally quiet and apart from a little farm muck were fairly clean to ride along.  We had great views of the edge of the Yorkshire Dales south of us. 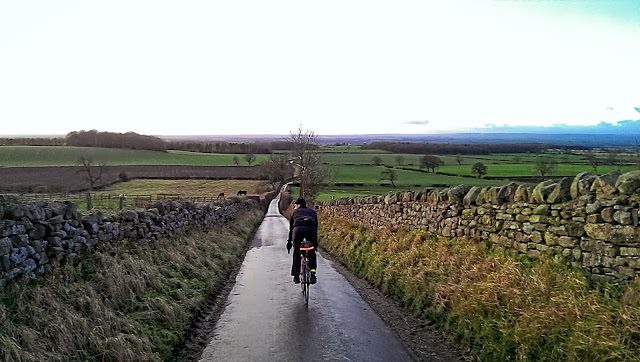 Before long we arrived at a small town and thought it worth recording the journey ‘le baton’ was enjoying so photographed Steve by the town sign. 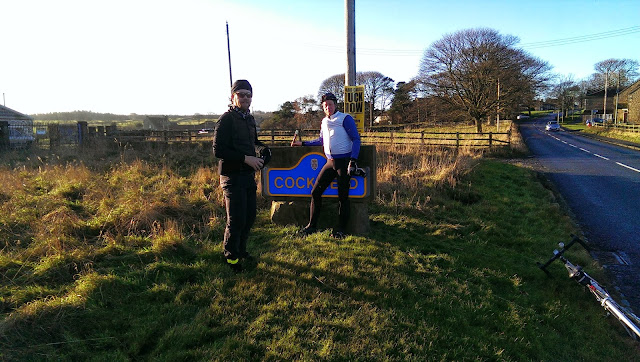 We continued to Woodland at a leisurely pace and enjoyed conversation, the scenery was beautiful and unfortunately I hadn’t brought my camera, only my phonecamera, so I was limited with the images I could catch.  Thankfully Dean had brought his and after we had passed “Holdsworth Farm” and descended to Eggleston he started to take some pictures on the move.  We decided it was too early to go straight to Middleton-in-Teesdale so diverted on the B6278 Roman Road towards Bollihope Common. 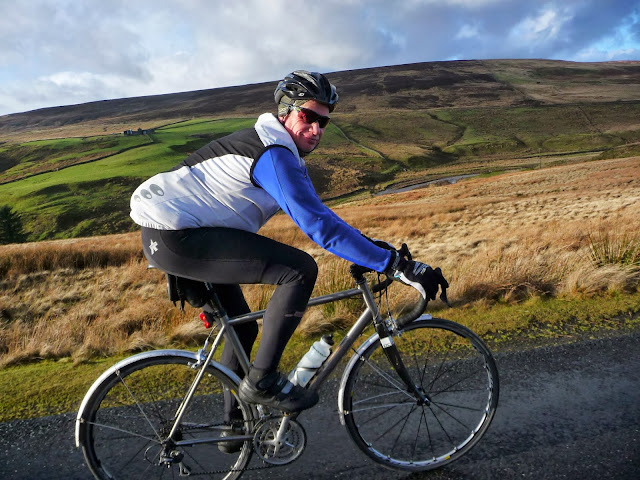 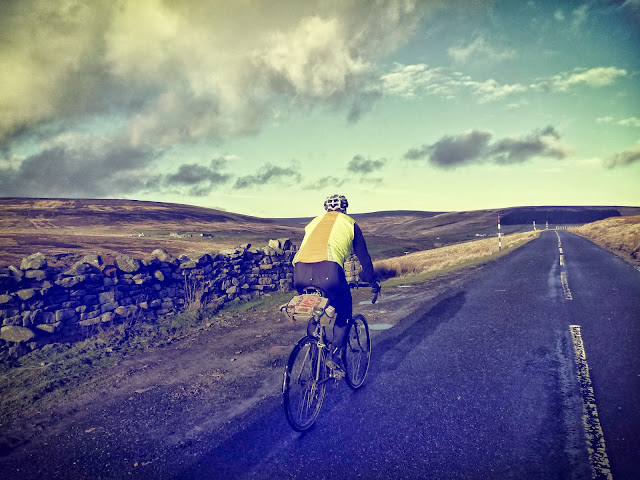 At ‘Little Eggleshope Beck’ we looped back towards Middleton-in-Leven and started the climb back, this time into a very stiff headwind with touches of rain.  As we climbed the puncture fairy came back to visit and attacked Steve’s front wheel.  Dean and I bravely hid from the wind and rain in the shelter of a dry stone wall and offered Steve advice.  How on earth he managed to get the tyre back on the rim with stone-cold fingers is beyond me.  Of course the valve came out of the tube after he had pumped it up, necessitating a repeat exercise.  Who thought removable valves was a good idea? 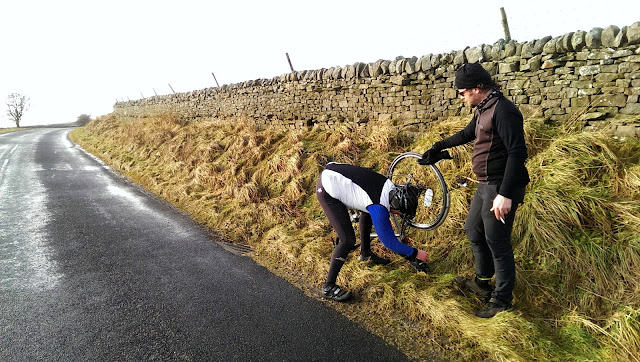 While stopped I took some photos of this section of the North Pennines, and as I was looking around the hailstones gently started. 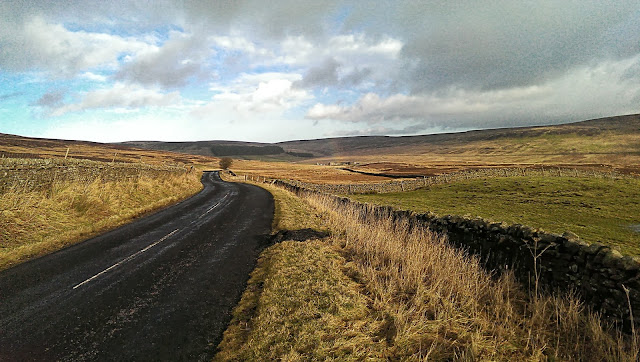 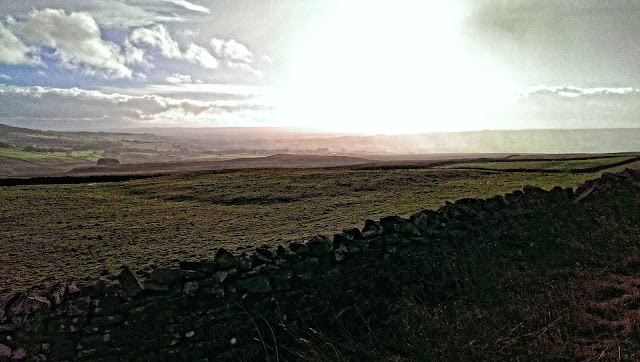 As soon as Steve had repaired the valve and pumped the tyre up we were off again, but this time we were all absolutely freezing.  I mentally carried out a body-part health-check.  Chest, arms, thighs, head… all warm.  Toes.. chilly.  Fingers… unbend-ably cold.  As we descended into Middleton I was struggling to pull the levers, but I kept quiet knowing that whatever I was suffering was probably nothing compared to Steve.  And if Steve had stoically coped, then I ought to.  We arrived at The Teesdale Hotel and treated ourselves to a BlackSheep Christmas Stout and some Leek and Potato soup in front of the roaring log fire. 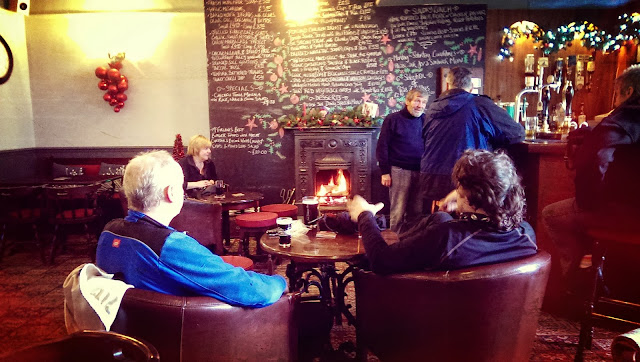 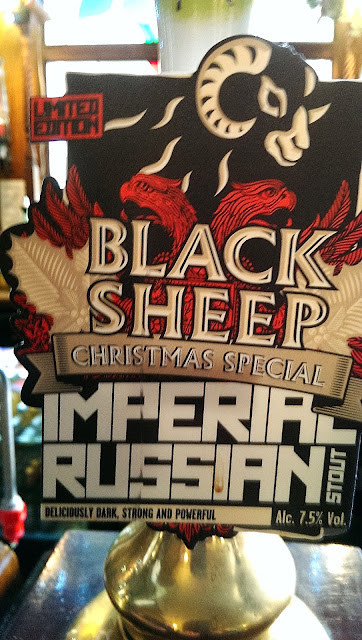 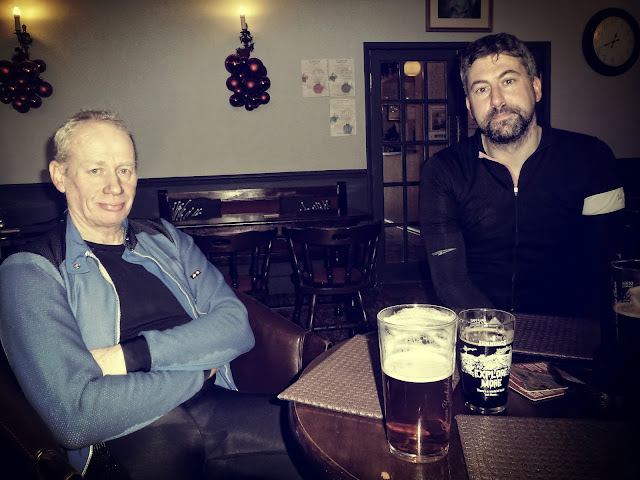 We spent an hour in the hotel and were toasty and warm before we set off again homeward bound.  Thankfully we now had a strong tailwind and a straight, slightly downhill route home.  Although the rain was on our backs, by the time we climbed Eggleston bank our legs were warmed up and we put a turn of speed on for the undulating road back to Staindrop.
The last section run into Darlington is flat and easy going, along the traditional stages of the Darlington “Hell of the North”.  We rolled back into town and stopped at “The Travellers Rest” for a final beer and farewell.  Steve and Dean did a handover of the baton as Dean will be taking it westward to the Lake District before the end of 2013, to continue it’s path northward to John o’Groats. 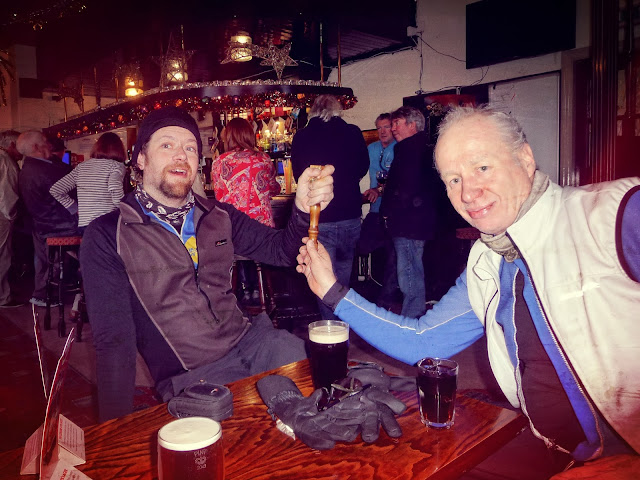 Leaving the chaps here in Darlington I had a mosey back to Ingleby Barwick with a lovely breeze to my back, getting home just before dark with 145km covered with 1,400m ascent.  Wonderful.  I must go out in the North Pennines more often – but perhaps in the summer!