Still howling a gale and pouring with rain, the storms from this winter combined with the descriptions from the BBC are doing their best to keep me indoors – but no more!  Too many mince pies and I need to head out and get some yacf LEJOG touring in.  (For part 1 read here)
In the face of a gale like this I decide to take the apocalypse bicycle out again and keep to the cycle friendly paths along the Tees.  While I have regularly reported in this journal about countryside rides, I have not said much about the industrial heritage rides available all around Stockton and Middlesbrough along the side of the Tees. 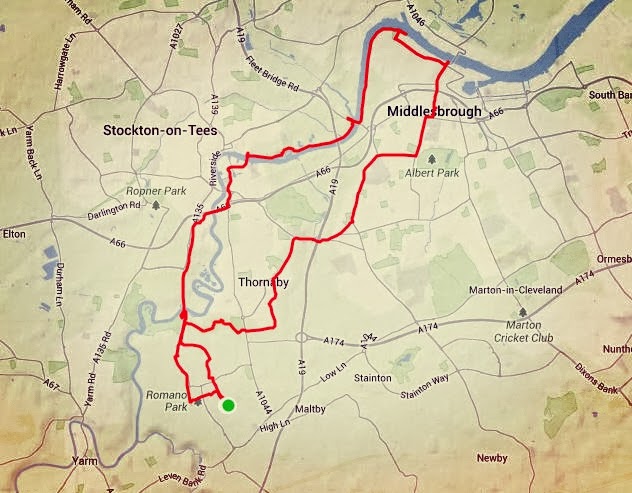 Crossing the Tees leaving Ingleby Barwick on the Jubilee Bridge I kept to the share use cycle path until I came level with the A66 and along side it to cross the Tees again at the A66 Surtees Bridge.  The river is still quite narrow here, but runs slowly and quite deep.  The impact of the Tees Barrage has been to stop the river from being tidal at this point and much more pleasant to look at.  The downside to the Tees Barrage is the poor design of ‘fish ladder’ which basically acts as a larder for the seals which like to sit there picking up trout and salmon.
There is a bit of cycling through the business estate and student accommodation to reach the Tees again as it bends back on itself, this time to cross on the Infinity Bridge – so called because on a calm sunny day the reflection of the shape creates a symbol similar to the infinity symbol. 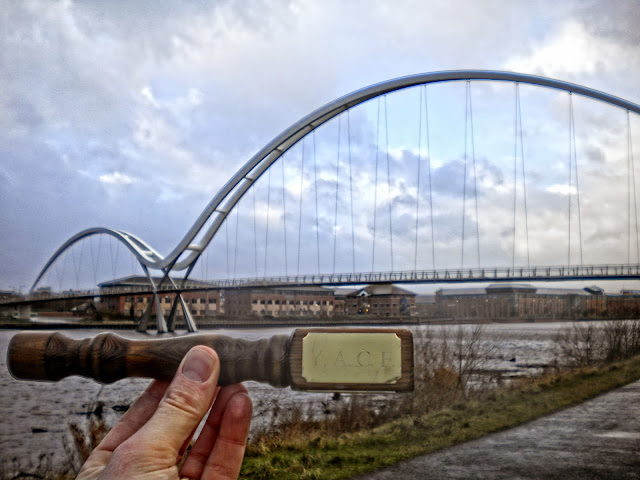 Onwards along the towpath to the Tees Barrage and the home of the White Water Centre.  This has just received a significant investment to pump much more water and effectively run whether the tide is in or out.
Continuing along the towpath on the northern bank of the Tees I pass undetr the A19 Tees Viaduct and reach the Newport Vertical Lift Bridge.  This is an amazing engineering feat – to have massive engines turning gears which use very large chains to pull the whole road deck up 37 metres.  Standing beside this bridge and being able to cycle over it away from the road is wonderful.  I did notice that the chain looked a bit slack though (cyclist comment).

Coming down onto the south bank of the Tees and following the towpath further, I’m being blown along by a rather strong wind, and to my right, well away from the river I can see the Transporter Bridge.  Obviously the river bends by almost 180 degrees up ahead.  Following the shared use cycle path over the gravel surface I eventually reach a great viewpoint for this bridge.

I return to the roads to make my way past the last riverside businesses to reach the bridge itself, which is closed due to the high winds.  This bridge is basically a suspended platform on long cables which is winched from one side of the Tees to the other.  It can carry up to 9 cars I think and is a great experience if you have time and don’t mind a slow ride.  The cost is very low.  I heard that when the Tees was busy with workers, many people would avoid the toll by using the free-to-use ladders and footway over the top of the structure, many people carrying bicycles on their shoulders!  People have fallen off, and the is a video of the opening ceremony of the bridge, in which a man falls off the platform as it pulls away from the bank.

From here I now decide to circle back through Middlesbrough City Centre and past the MIMA (Middlesbrough Institute for Modern Art) and along Linthrope Road and past the Dorman Museum and Albert Park to reach Acklam.

This is a lot tougher than the towpath because not only am I now cycling in quite busy traffic, I’m heading almost directly into the teeth of the storm and the horizontal rain is blattering against my face.  Of course I manage to smile and work hard to make it look easy whenever there is someone walking nearby.
As I cross over the A19 I notice there is a shared use cycle path along the side of it heading south, pretty much in the gutter of the four lane section of dual carriageway.  I choose not to follow this but to head back into the redeveloped Thornaby which is looking much more wecloming to shopper-types.  Cutting through the estate and back down to the Tees I arrive back in Ingleby Barwick on hidden lanes.
These weather forecast folk seem to want to keep us indoors with all the tales of doom, and although I agree that the weather was vile – it wasn’t so vile as to prevent me having a fantastic ride out.  And while the rain and wind were to my back it was actually really easy and nice.
Tomorrow it is time to take ‘Le Baton’ back to Deano for the next part of it’s LEJOG adventure.  I hope it has enjoyed staying in Teesside and will remember the “Spa Day” it received for Christmas. 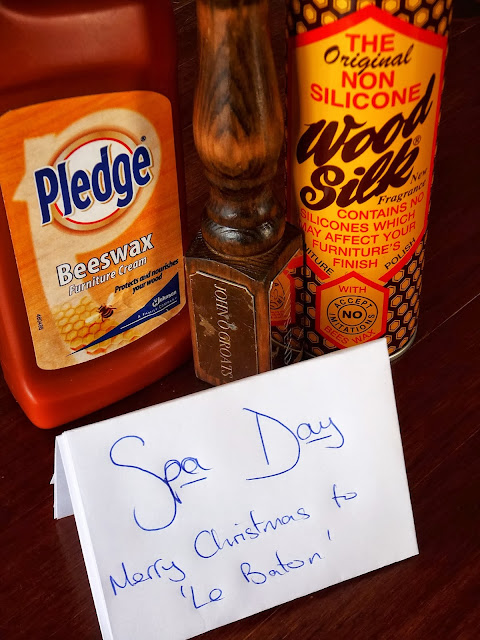