According to an online “what type of Moomin are you?” test, I fall into the category “Moomintroll”. 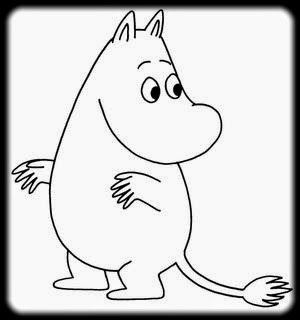 Ritva and Jan have kindly lent me their Tunturi Retki Super again and after work I’m getting some exercise instead of visiting Denis pizza. Denis pizza is a wonderful place to eat, but it is not improving my climbing ability. I might be more aerodynamic after a trip to Denis though; to quote Captain Beefheart, “A squid eating dough in a polyethylene bag is fast and bulbous.” Now there is a mental image that will take some brain floss to clear out. Diet time. 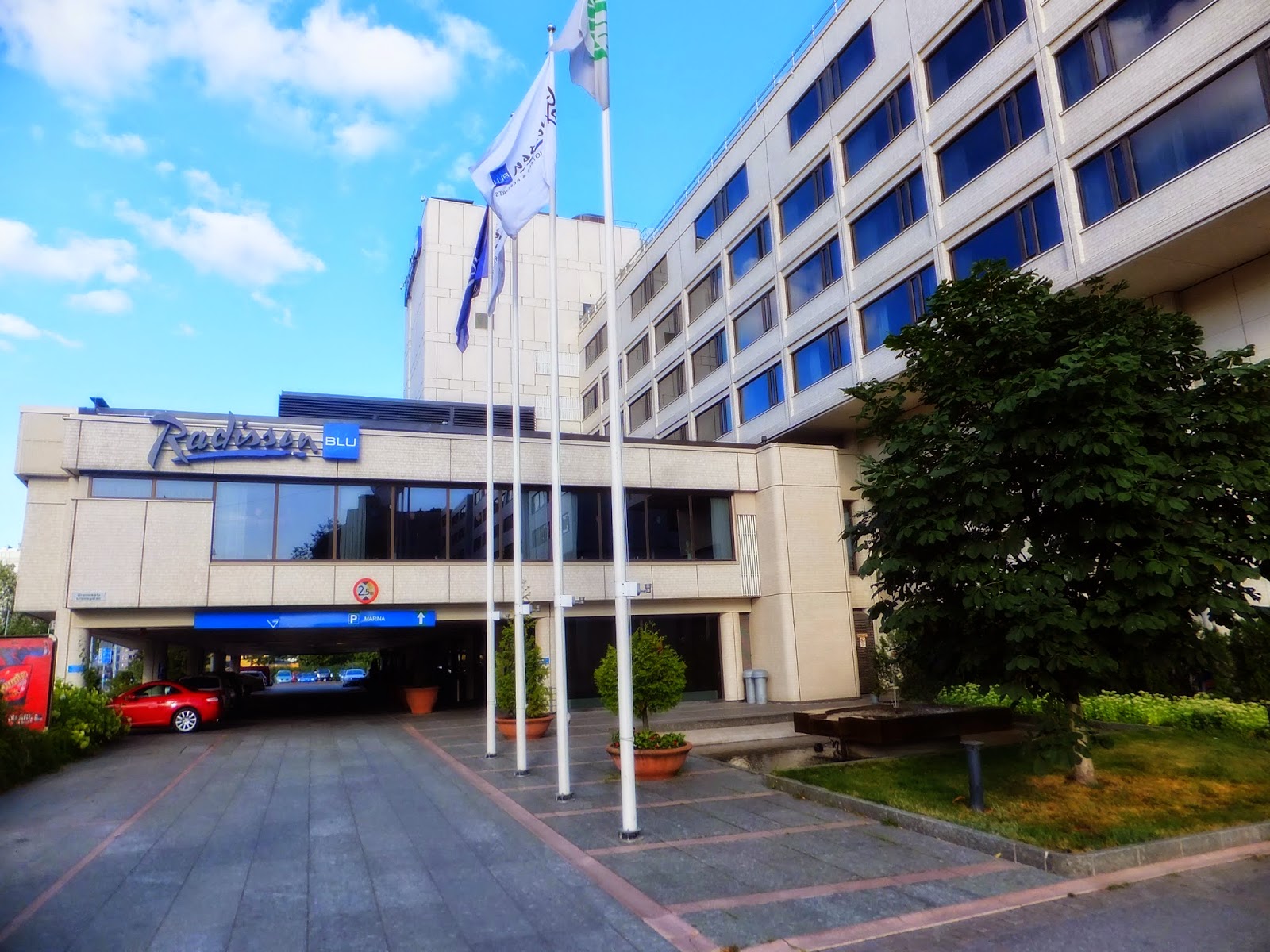 Setting off from the Radisson Blu in Turku I immediately head the wrong way along the riverside, and hear the distress call of the baby garmin looking for its route. Turning north and west I head out of town on the cycle paths. Back home I detest cycle paths; they are not designed for cyclists they are designed for motorists so as to keep traffic moving unimpeded. In the UK, whenever a cycle path and a road cross, the motorist has right of way. For this reason I find it more pleasant to ride as part of the traffic. Also UK cycle paths are usually full of broken glass – our society just doesn’t care for itself any more. In Finland the situation is totally different. It is true that they have some more space, but they also care about each other, they care about doing the right thing. So cyclists on cycle paths have right of way at junctions; motorists turning into a street stop to look for pedestrians and cyclists. Also the paths are wide and clean; it is like having a totally separate road network dedicated to vulnerable travellers. It is wonderful to use cycle paths in Finland. 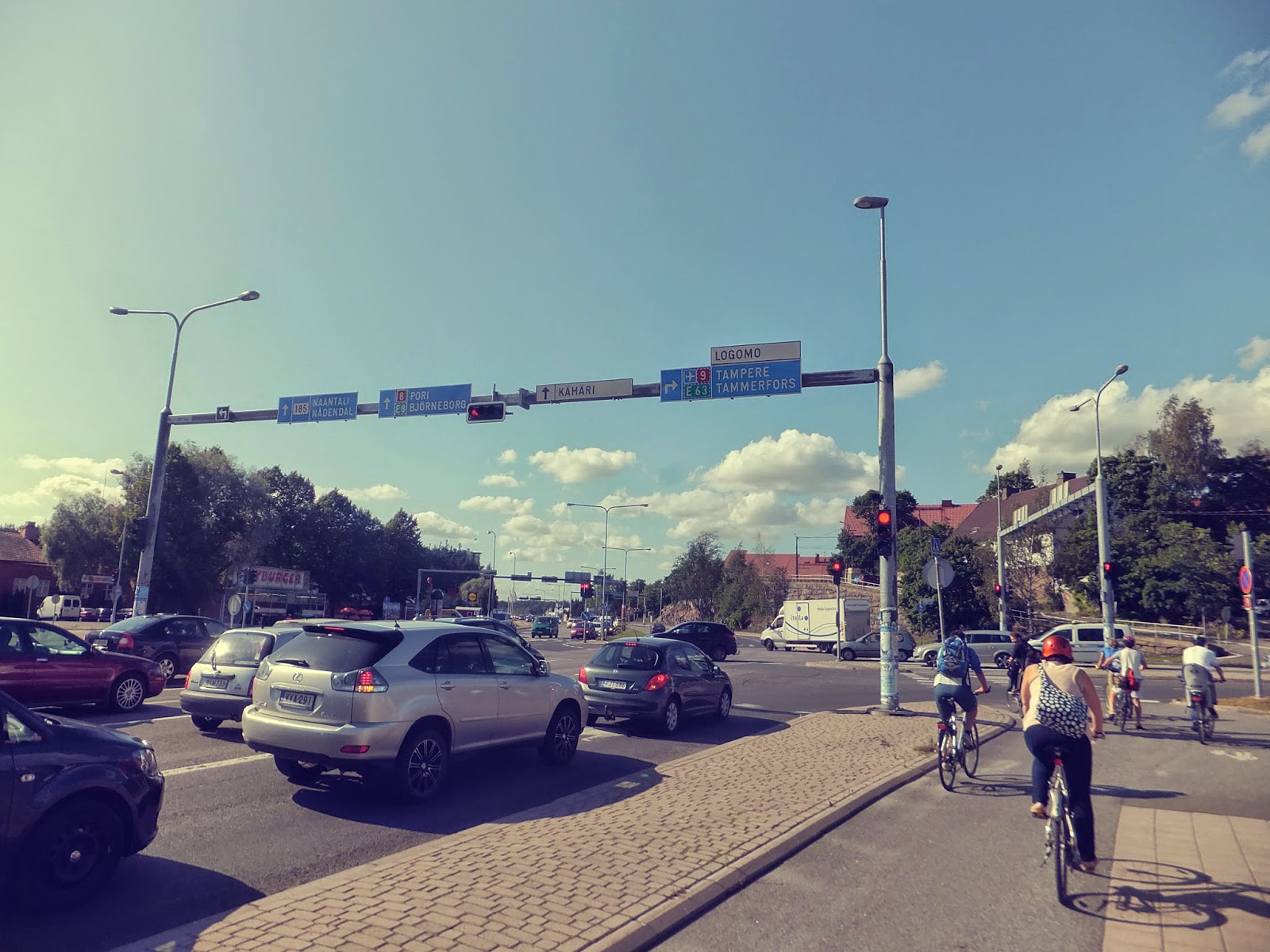 Although I had planned out a route and uploaded it to the little navigation device, I found that the sign posts were clear and unambiguous. At every junction I knew I was heading the right way to Naantali, which was reassuring. RidewithGPS had also plotted a route which automatically took the cycle paths too. It is lovely when systems work without a problem. 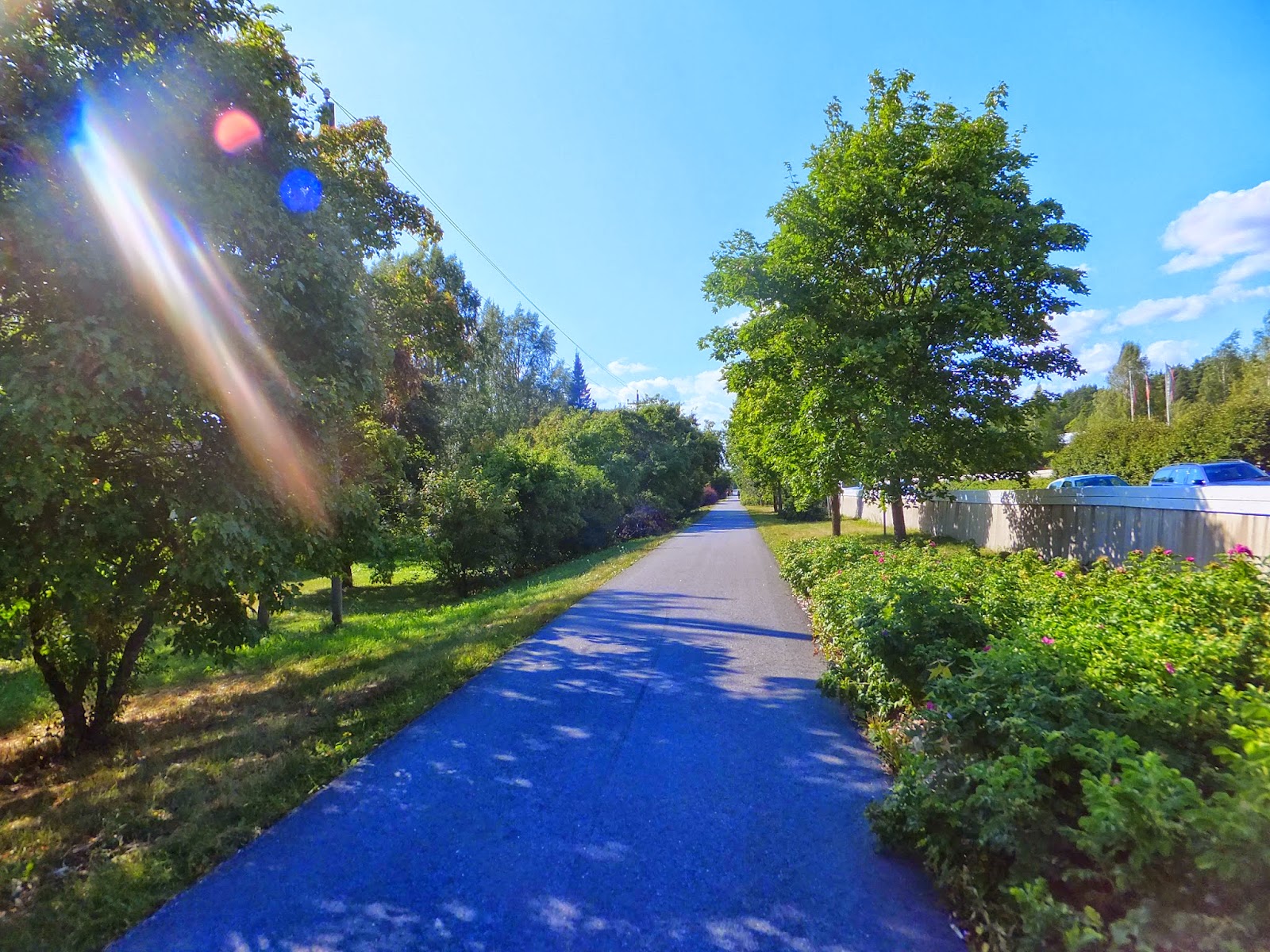 The evening was warm, bright and a slight breeze from the north west kept me cool as I rode. There were plenty of others out too, cycling, walking and even using inline skates and walking poles to mimic the action of cross-country skiing. 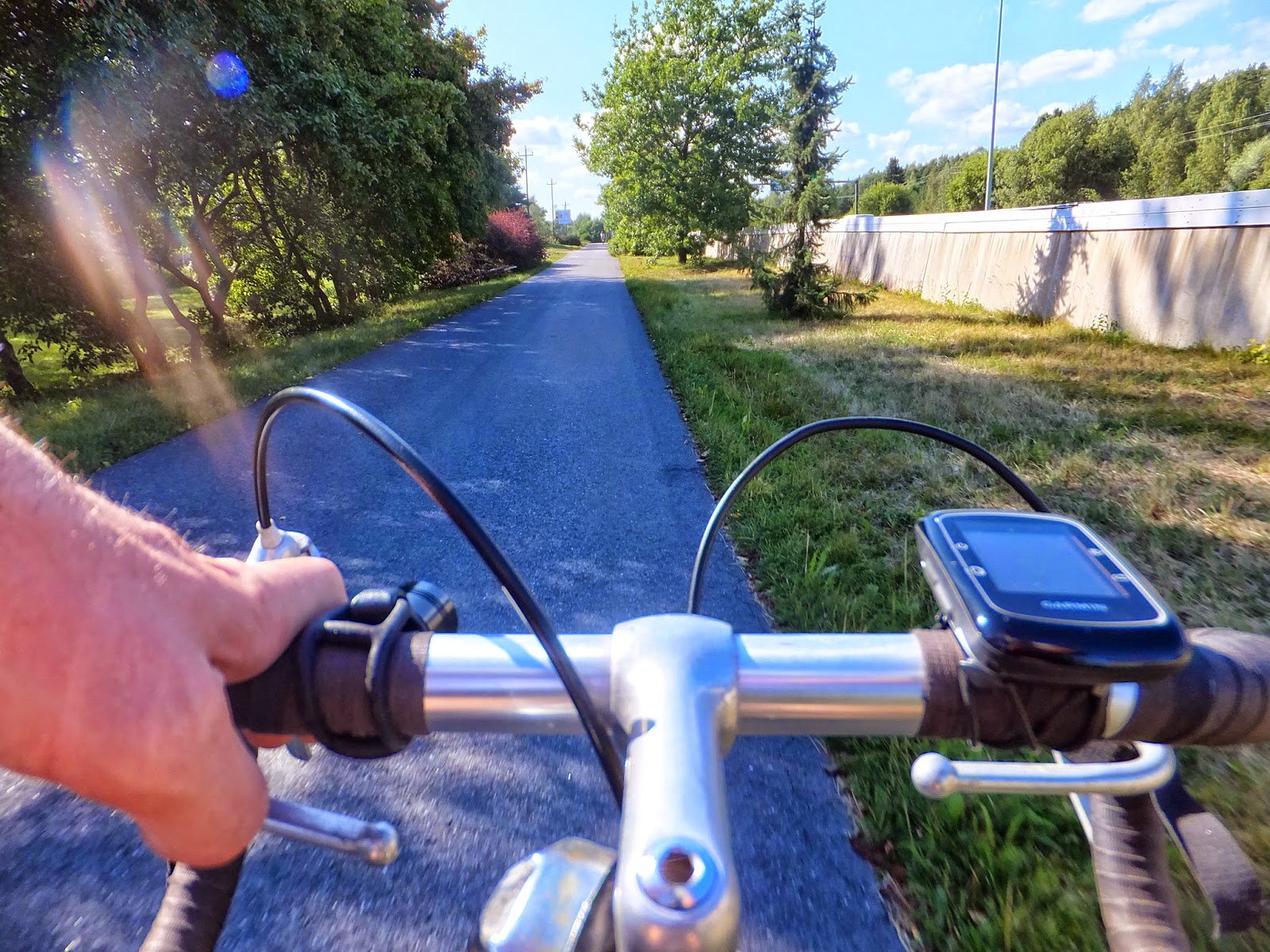 This vintage Tunturi needs some loving, it is a classic bicycle but the rear brake cable has snapped and the local bicycle shop wasn’t interested in helping me resolve the problem.  Ritva knows I enjoy riding this bicycle and I’m not phased by being restricted to a front brake only.  If its good enough for Carl Fogarty, its good enough for me.  Learning to use friction shifters only takes a few kilometres and finding the right amount of movement to accurately shift gear starts to become instinctive.  The only challenge presented is an unexpected sharp climb, the sort you find just round the corner when pootling along in a world of your own.  To quote the 70’s band, ‘The down-tube shifters’…. “If you can’t be with the gear you love, love the gear you’re with.” 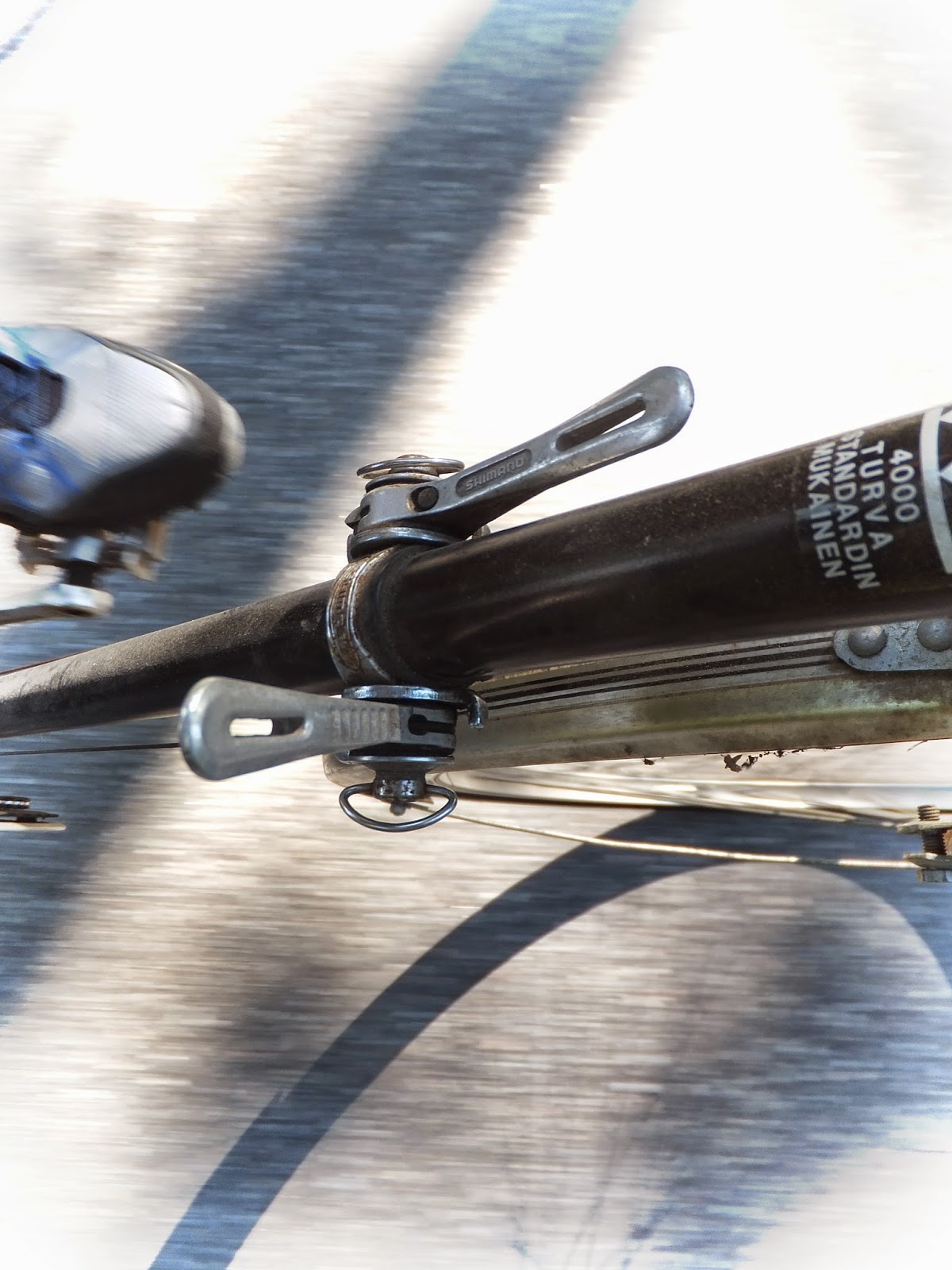 The route I’d auto-generated took me past arable crops and through silver birch woods, the mainly flat Finnish countryside rolled by while I snapped away with my camera.  I was besotted with the silver birch copses surrounding me.  In Finland there is a profitable line of forestry, with a lot of families working the land for their long term investment in timber. 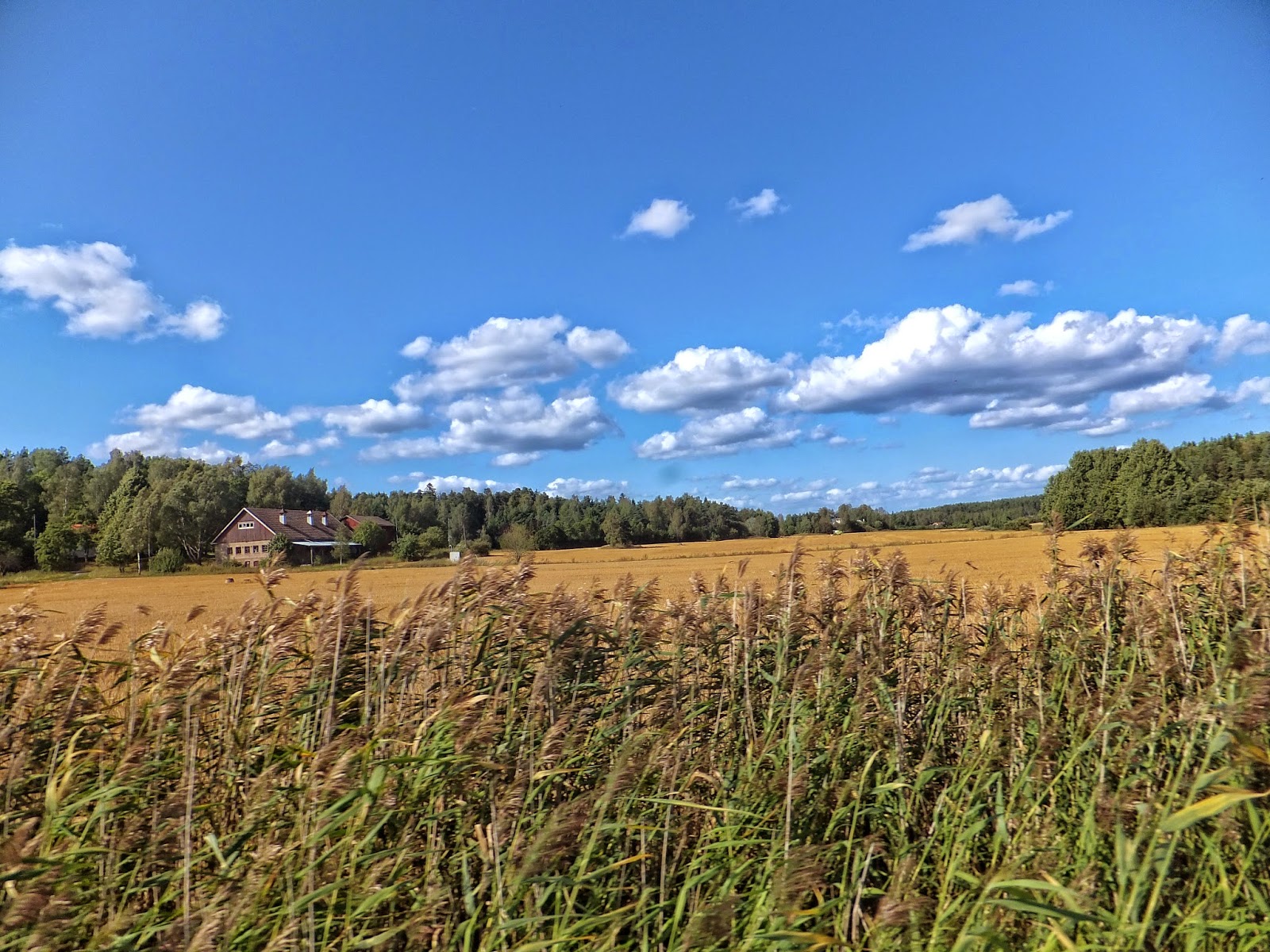 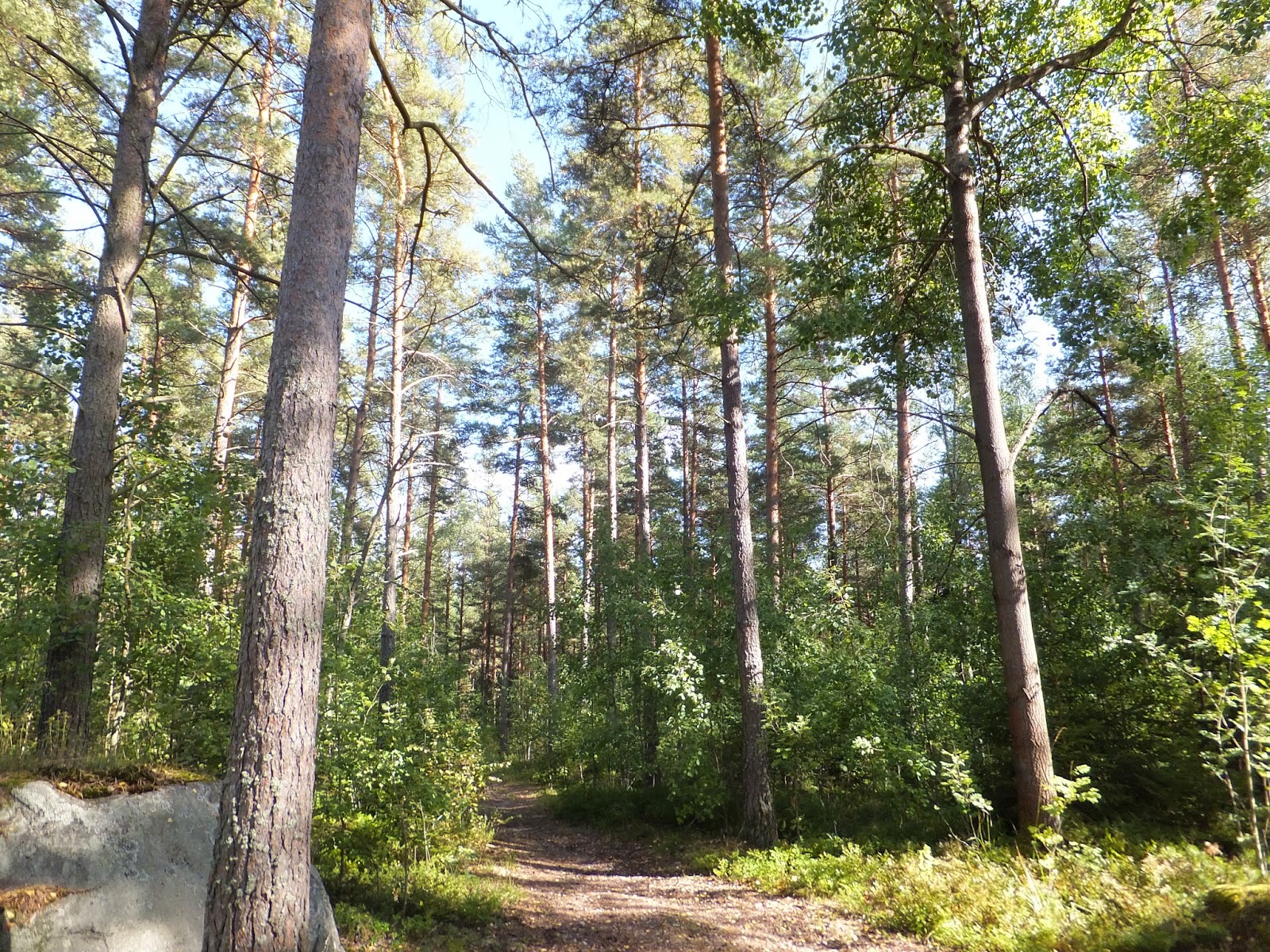 I found a nice wooded area to take a glamour-shot of the Tunturi.  I think this is a really beautiful bicycle, not just because of the simplicity of the mechanics or the thin steel frame, but because of how quickly it accelerates and how smooth the frame is over the lightly gravelled cycle paths.  I don’t know whether this was a racing bicycle in the past, but I was happy to take it up to 45kph on the flat. 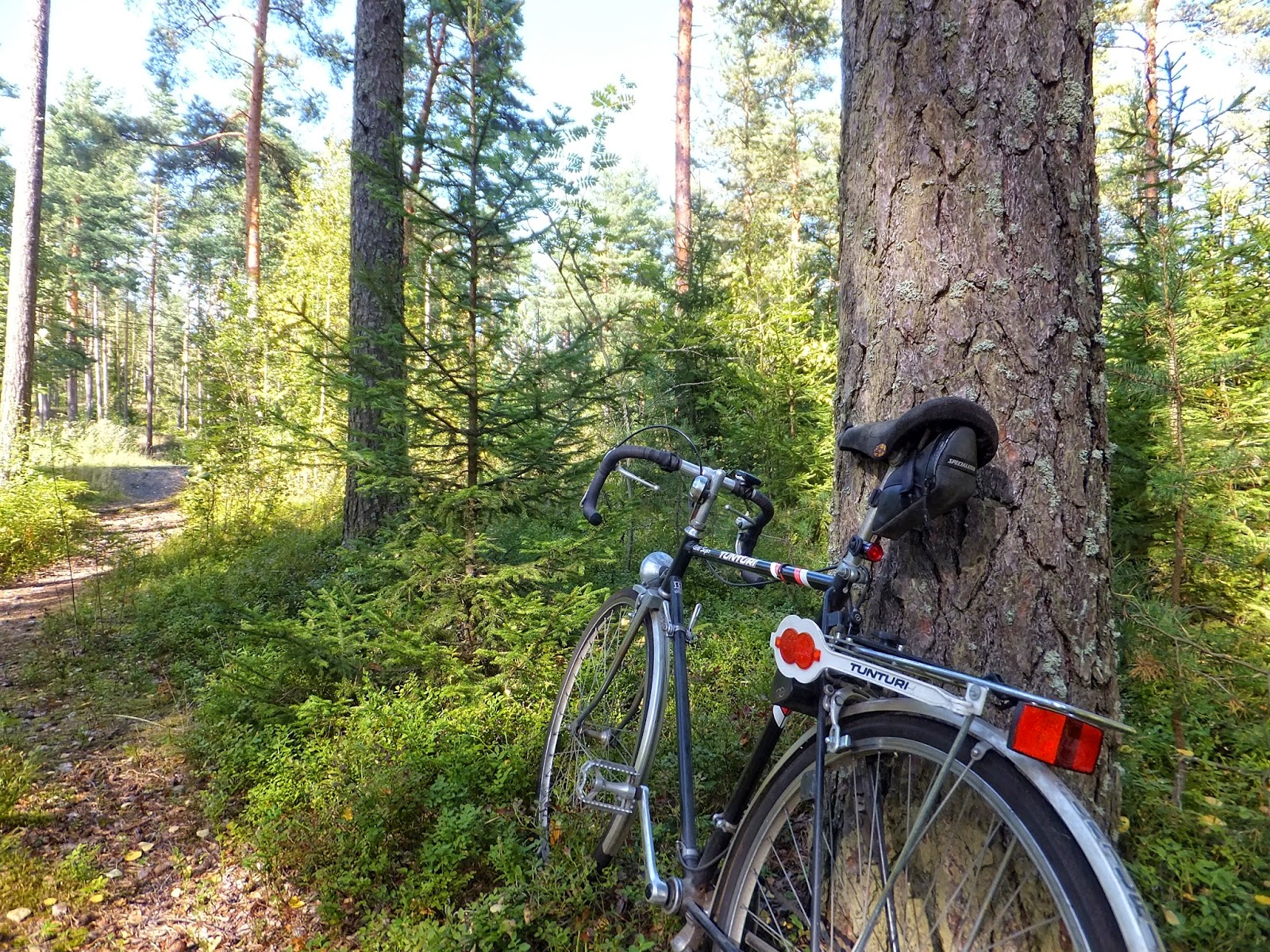 I did get lost once or twice, despite the chirps of the little navigation device and the excellent signposts.  There were two reasons for this, firstly, as a gentleman of the world, I clearly know exactly where I’m going and don’t need blatant sign-postage and contrary bleeping devices to contradict me.  Secondly, I was totally absorbed in my surroundings and absent minded about direction of travel.  So once or twice I found the breadcrumb trail on the little device heading off the screen while I assumed the road would eventually work out where I wanted to be and get with the program.  On one such occasion I ended up at the Neste compound gates.  Isn’t it lovely that in Finland there are cycle paths direct to oil refineries.  Reminds me of the path alongside the A174 to Wilton. Having said that, the only way to continue, other than pretend to work in the refinery, was to follow a twisty country road slightly downhill and back to the garmin’s breadcrumb trail. 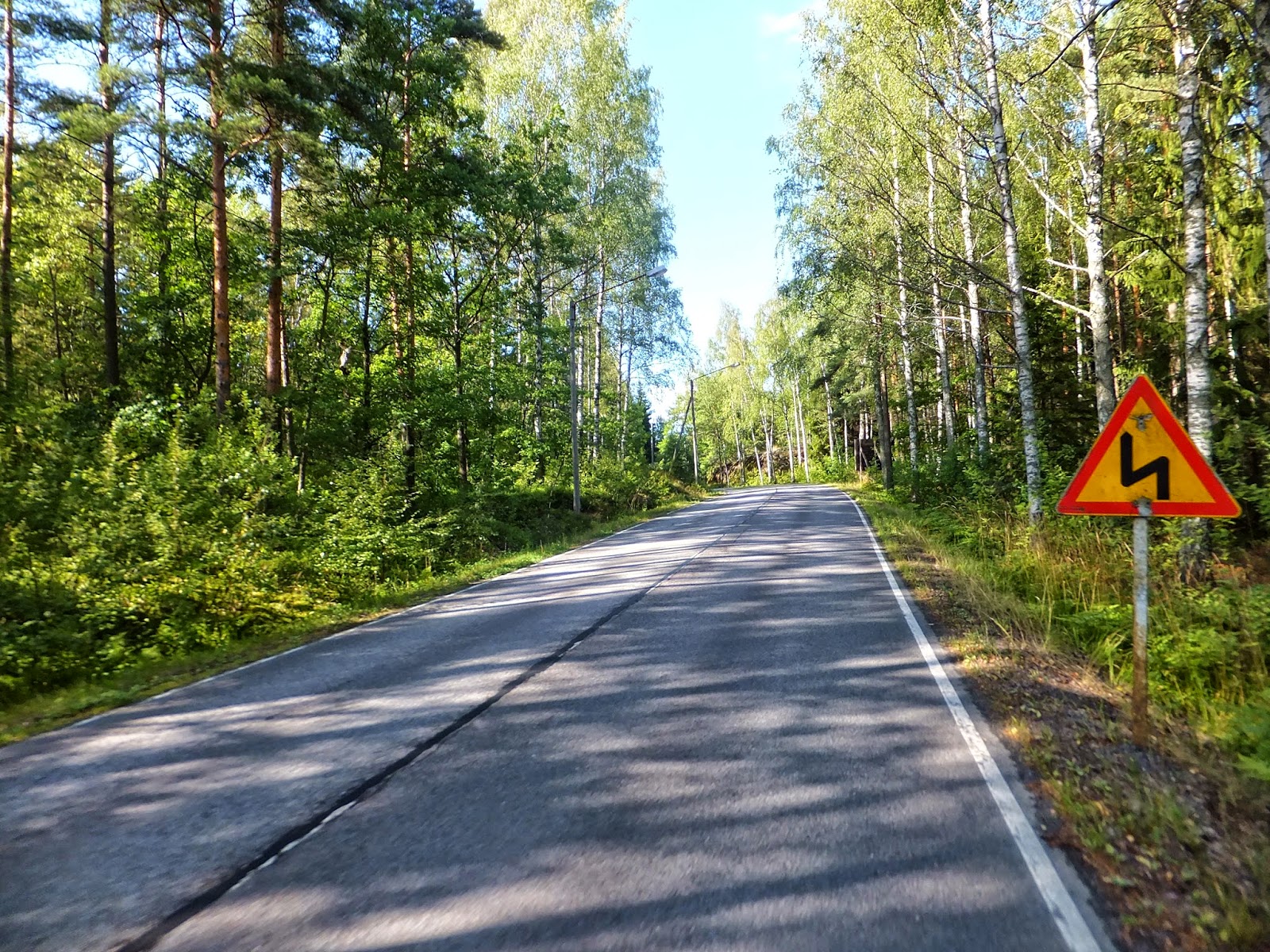 As I arrived in Naantali itself I passed through the high-tech science park area with its serious looking buildings, before connecting with a gravelled shared-use route.  I could see water through the trees and suddenly found myself at a little beach near the Naantalin Spa Hotel and Resort. 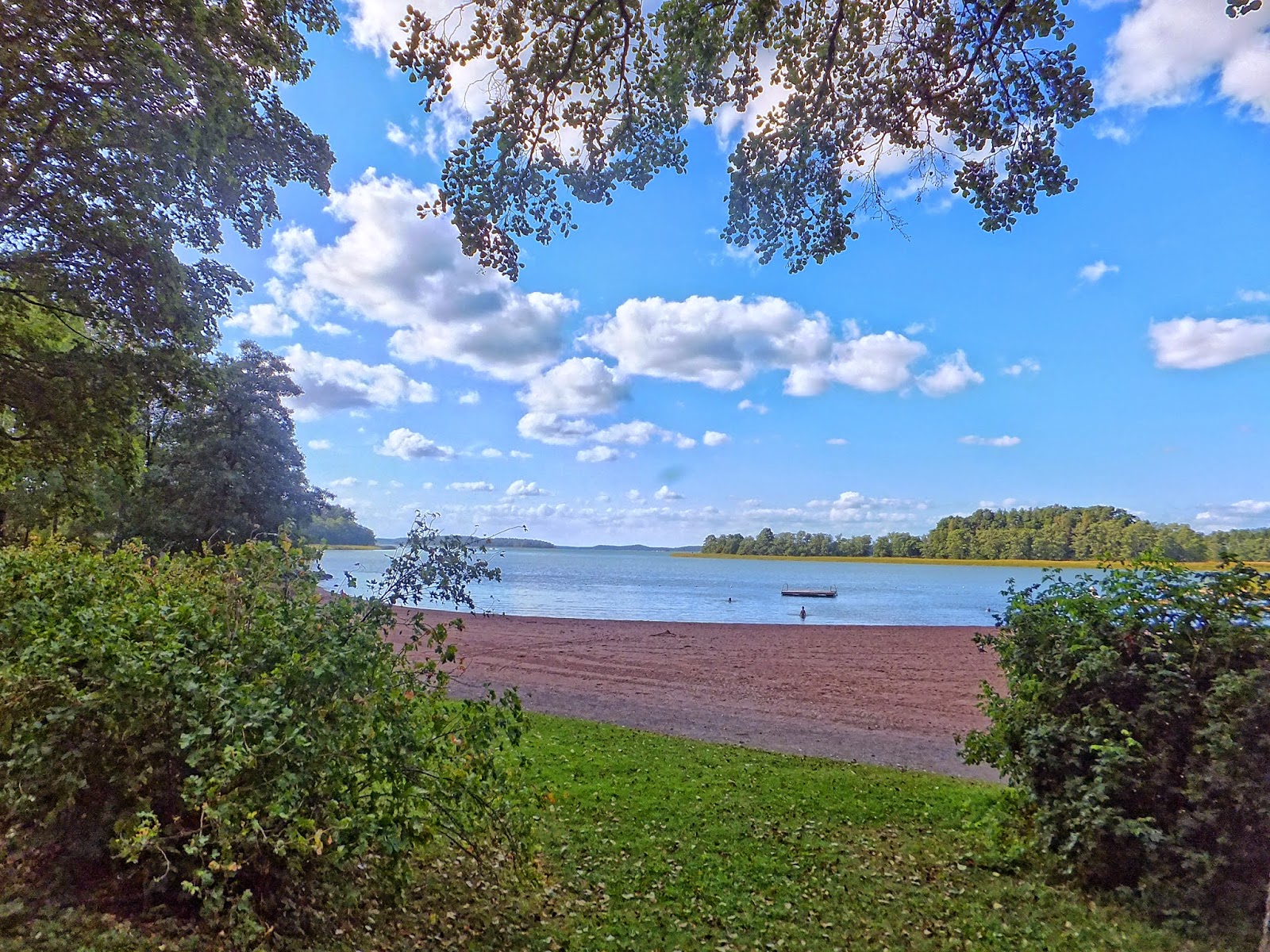 Just round the corner my Moomintroll adventure brought me to the Moomin Island.  I have noticed that when asking a stranger to take your picture it isn’t always possible to ensure the quality of the picture they return to you.  Sometimes black and white editing is the only way to go! 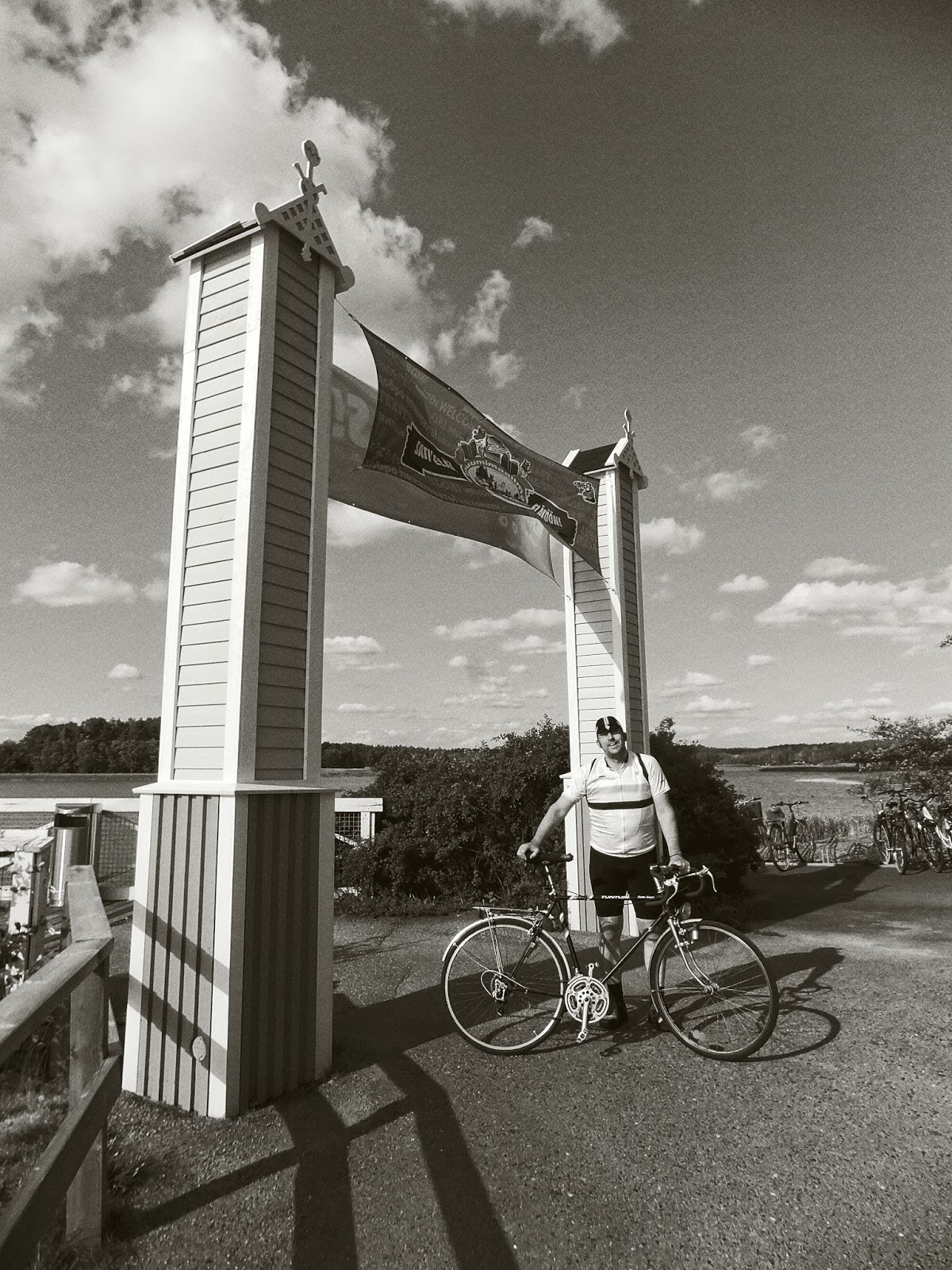 As I had not paid the 25 euro entry fee, this little Moomintroll was stopped at the gates by a smiling ninja dressed as an innocent young park attendant.  It was pretty impressive how she managed, with one eyebrow, to disable my attempt to enter the park and make my home among my fellow Moomins.  Ninja skillz.  Notice how she blends into the background ready to strike.  A right little feminine Chuck Norris.  I bravely ran away. 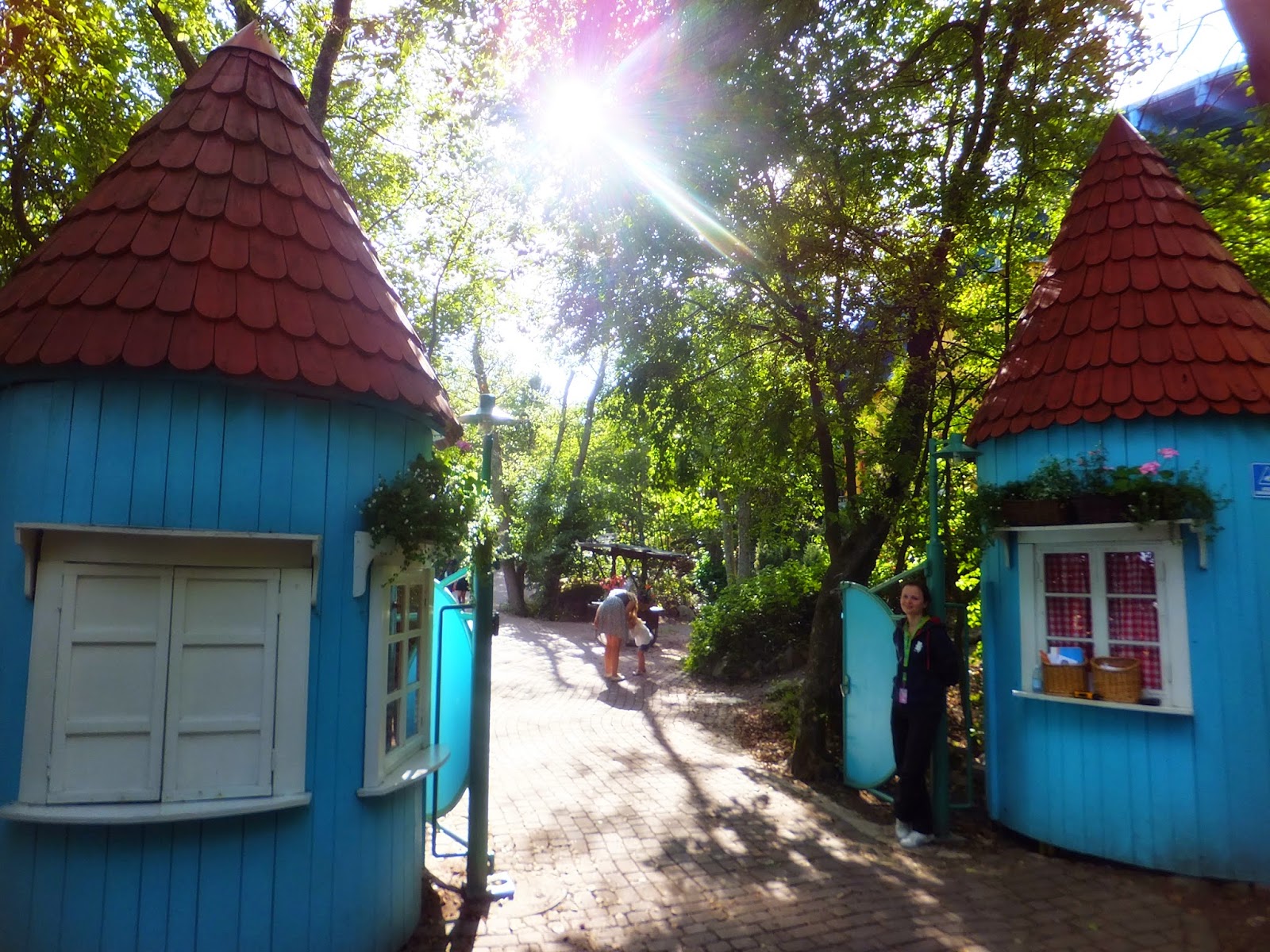 Naantali is a pleasant coastal resort, with a pleasant shopping area of consistently designed buildings, I’m sure it isn’t as fake as the famous street of Bergen where you see a beautiful row of wooden houses with the surroundings conveniently cropped out. 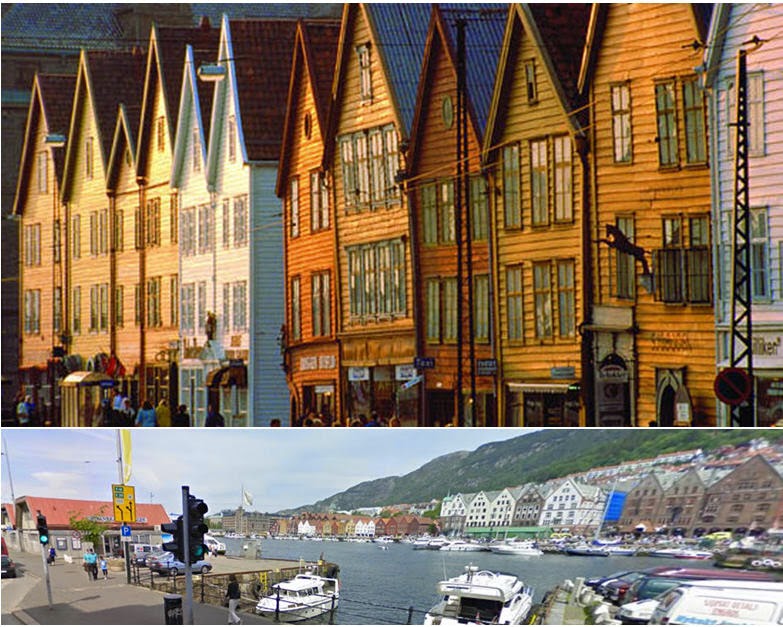 Indeed Naantali is a lot more consistent and actually beautiful compared to Bergen. 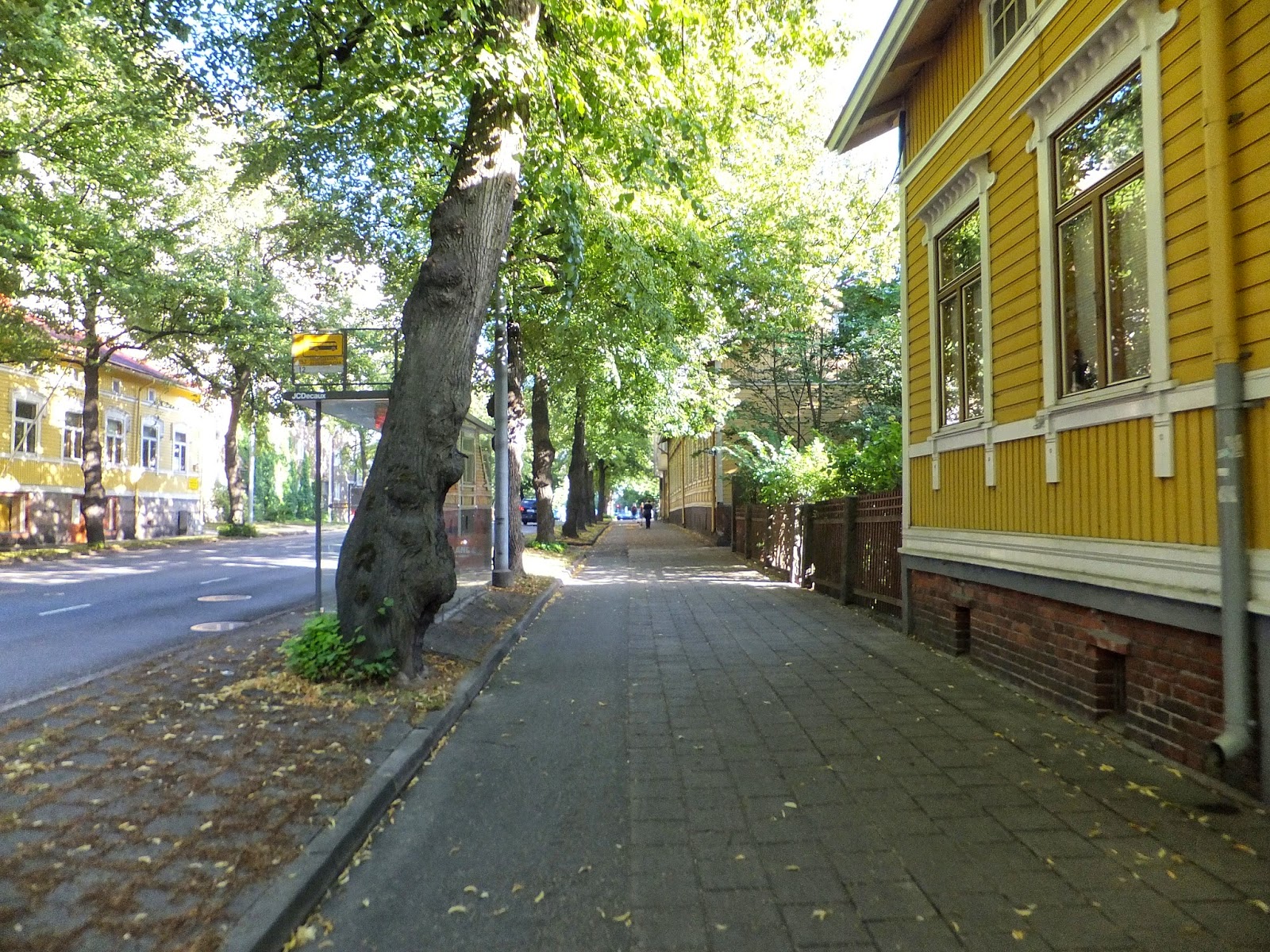 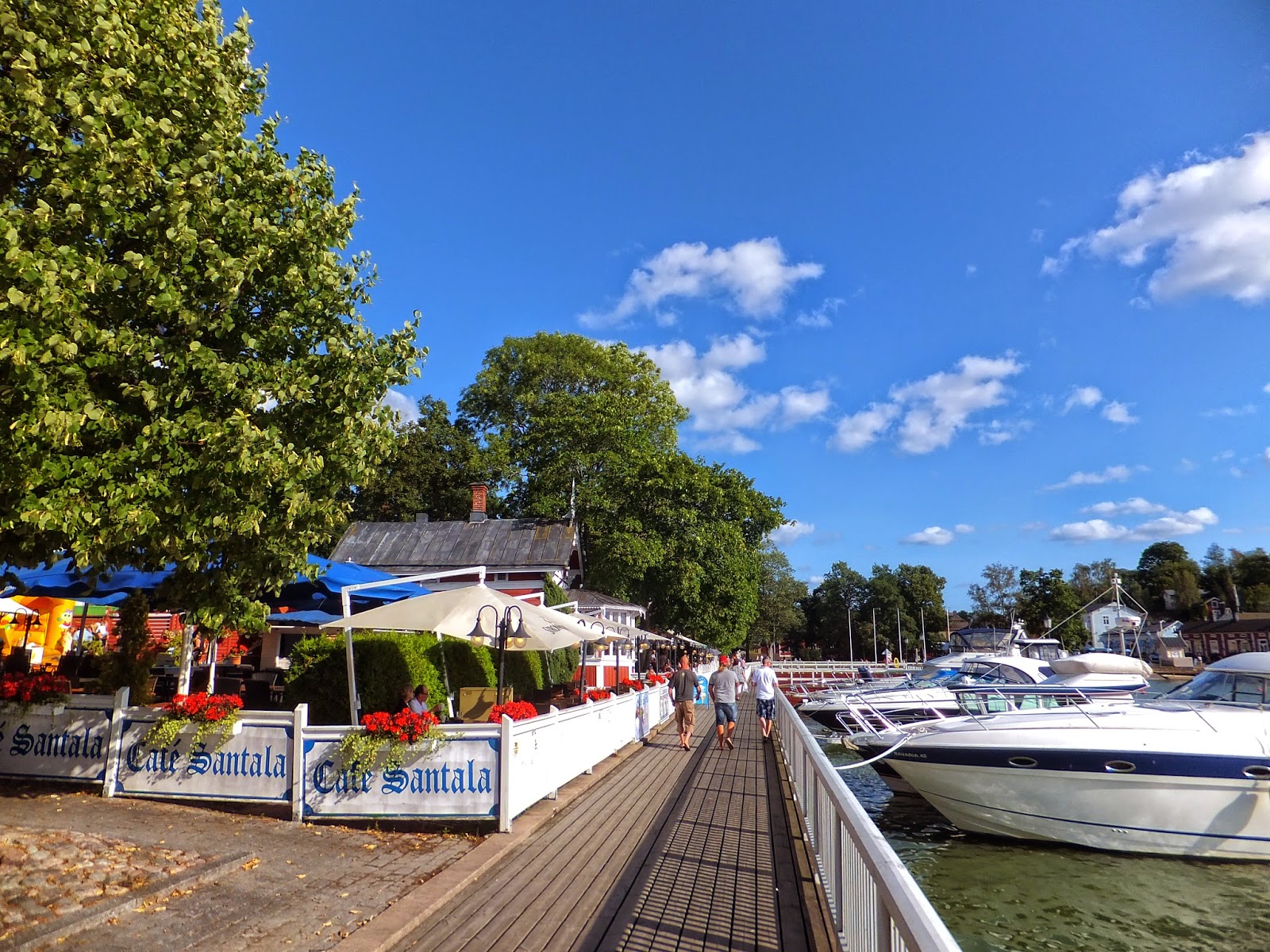 I toyed with the idea of stopping for an evening meal, but the forecast of rain at night, and the inconvenient truth of lycra and a Moomintroll physique helped me make up my mind to simply return to Turku the way I had come. 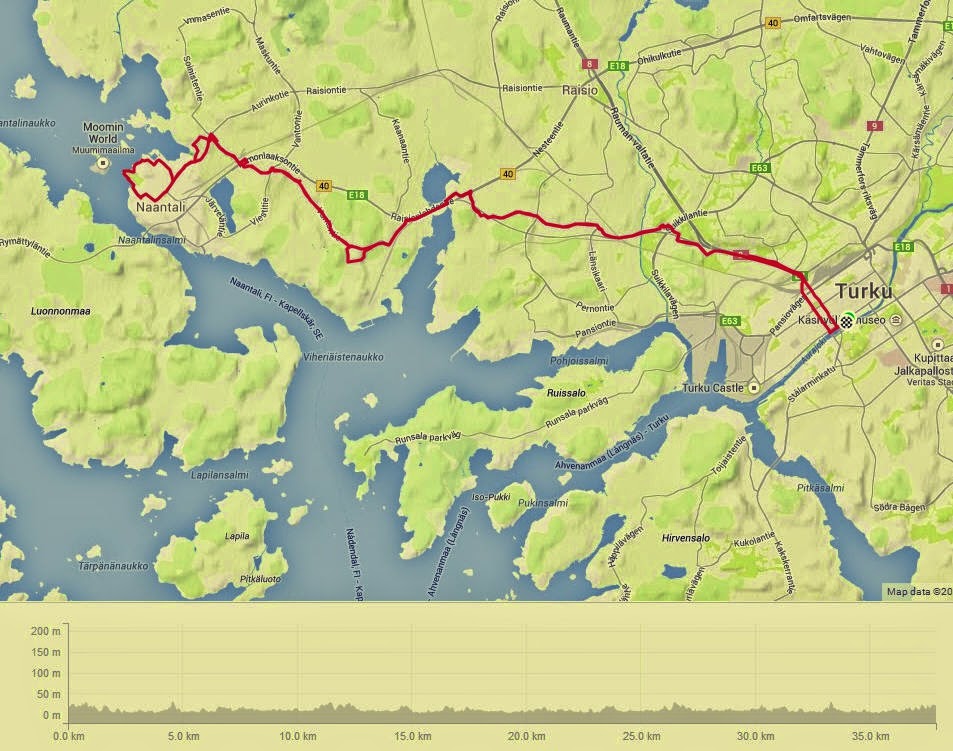 I enjoyed this gentle 40km round trip form Turku to Naantali and back, and if I’d been wearing more socially acceptable clothing I might have even enjoyed a good meal at one of the restaurants.   As it was I arrived back in Turku at about 8pm, passing Mikaelinkirkko before rolling up at the Radisson again. 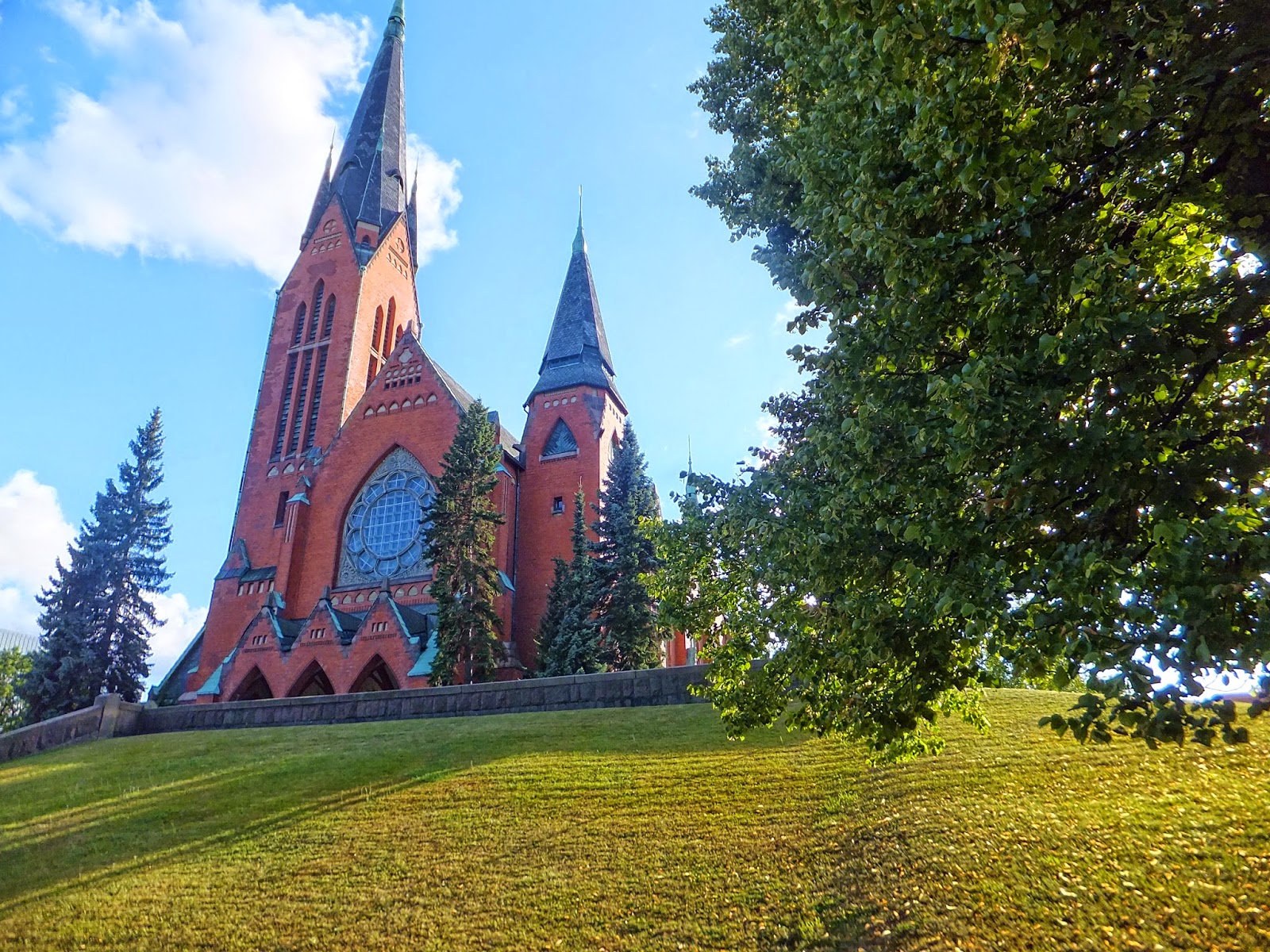