I asked Dean to join me for a ride around the Pennines on this last public holiday in August, and we were treated to a marvellous display of purple heather stretching as far as the eye can see. Dean said it reminded him of Zane Grey’s “Riders of the Purple Sage“. To be fair though, apart from the words ‘purple’ and ‘riders’; our bicycle ride bore no further resemblance to Zane’s book.  We certainly were not battling to overcome persecution by members of a polygamous Mormon fundamentalist church.  It didn’t rain while we were out, so Purple Rain wasn’t going to be appropriate either.  As this is my journal, I’m sticking with my own ride title “no unnecessary hills”, because this had been the big surprise of the day for me. 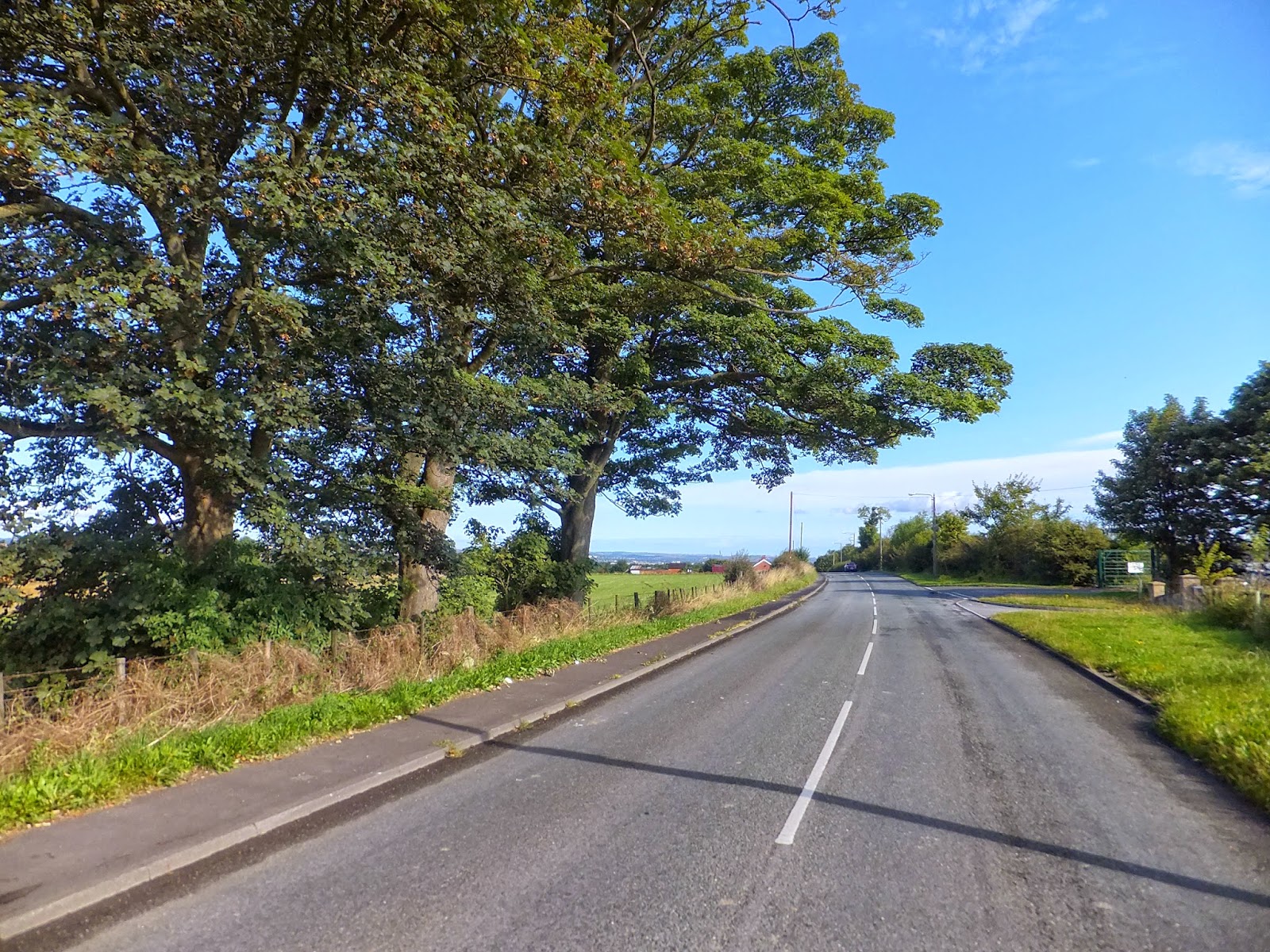 Bishop Auckland provided a location equidistant from Dean in Darlington and myself in Durham.  The A167 was totally quiet and an easy route down through Tudhoe.  There was a brief climb to Kirk Merrington and as I reached the open countryside I was treated to a view back to the coast at Teesmouth because the whole of the Tees valley had opened up before me.  That was to the east though, with flatter lands than I wanted to ride.  I turned west towards Bishop Auckland the the Pennine hills in the distance.  Dean and I met up at the Wetherspoon’s in Bishop Auckland for a 69p cup of filter coffee at 10am, with the sun shining bright and clear in the blue skies above us.

Our route plan for the day was simple; I wanted to ride both Bollihope Common and Crawleyside back to back.  They are fairly big climbs and it forms a lovely circular from Durham, this allowed us to ride up the Tees valley to Middleton-in-Teesdale, then tackle the climb over the isolated Bollihope Common to Stanhope, immediately followed by the Crawleyside climb which will be fondly remembered by anyone who has done the Sustrans C2C route.  From there it would be “all downhill” to Durham and hopefully back in time for the beer festival.

As we left Bishop Auckland we rode out through High Etherley and down to one of two gatehouses for Witton Castle, this one in Fearon’s Wood on Sloshes Lane.  The road running downhill to the gate is dead straight and it almost feels as though we were riding down a driveway with a portcullis ahead of us.  Turning west there, we weaved our way along the flatest route through this countryside that I’m aware of.  We reached Woodland and kept going straight on with the B6282.  As we emerged into the open we were surrounded by beautiful purple heather as far as the eye could see. 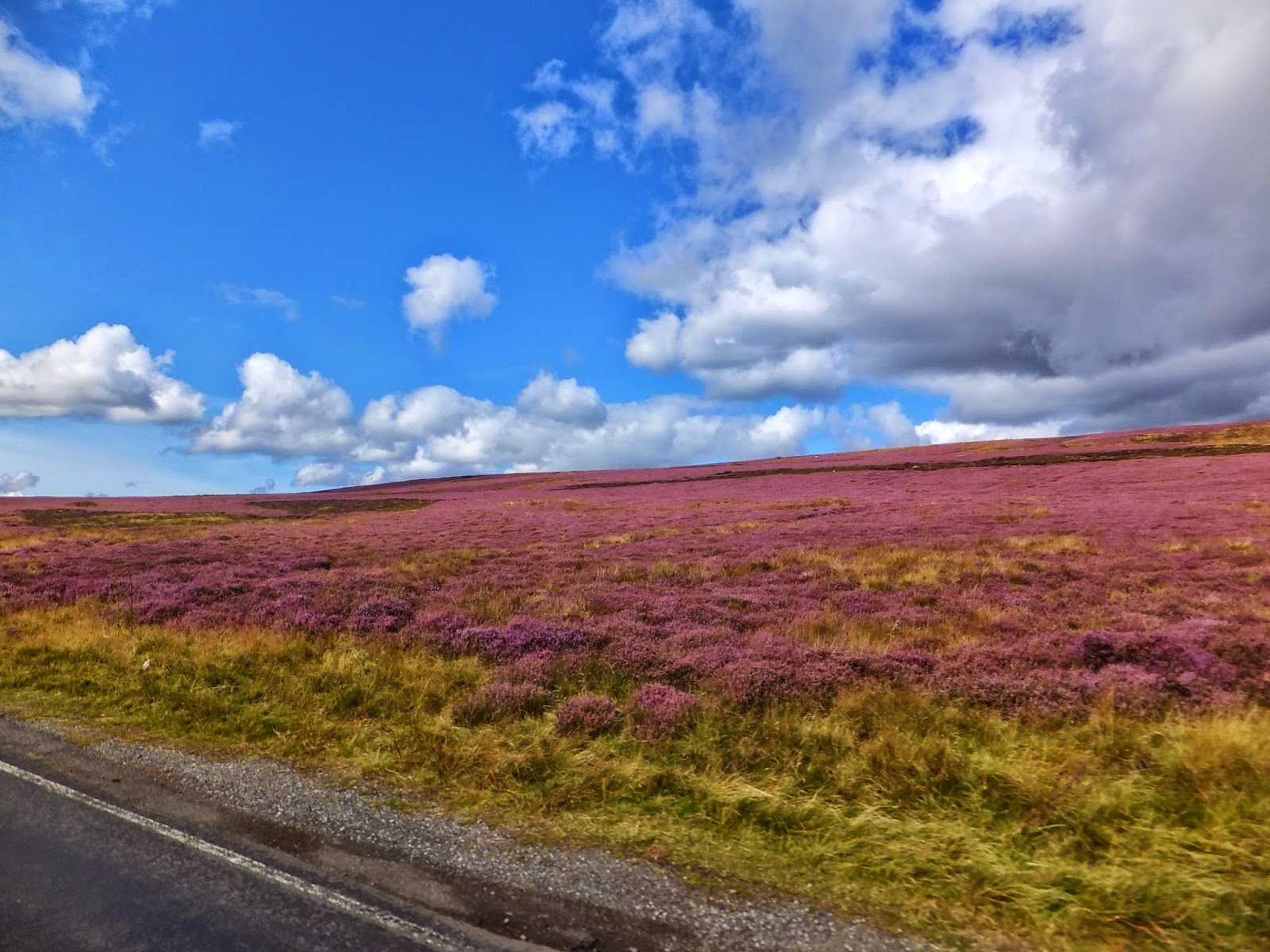 The air was crystal clear giving us unimpeded views of the valleys and hills around us, and just before Eggleston, while still on the top of the ridge, we stopped.  We were awestruck by the view of Cross Fell and Great Dunn Fell, the two highest points of the Pennine hills. 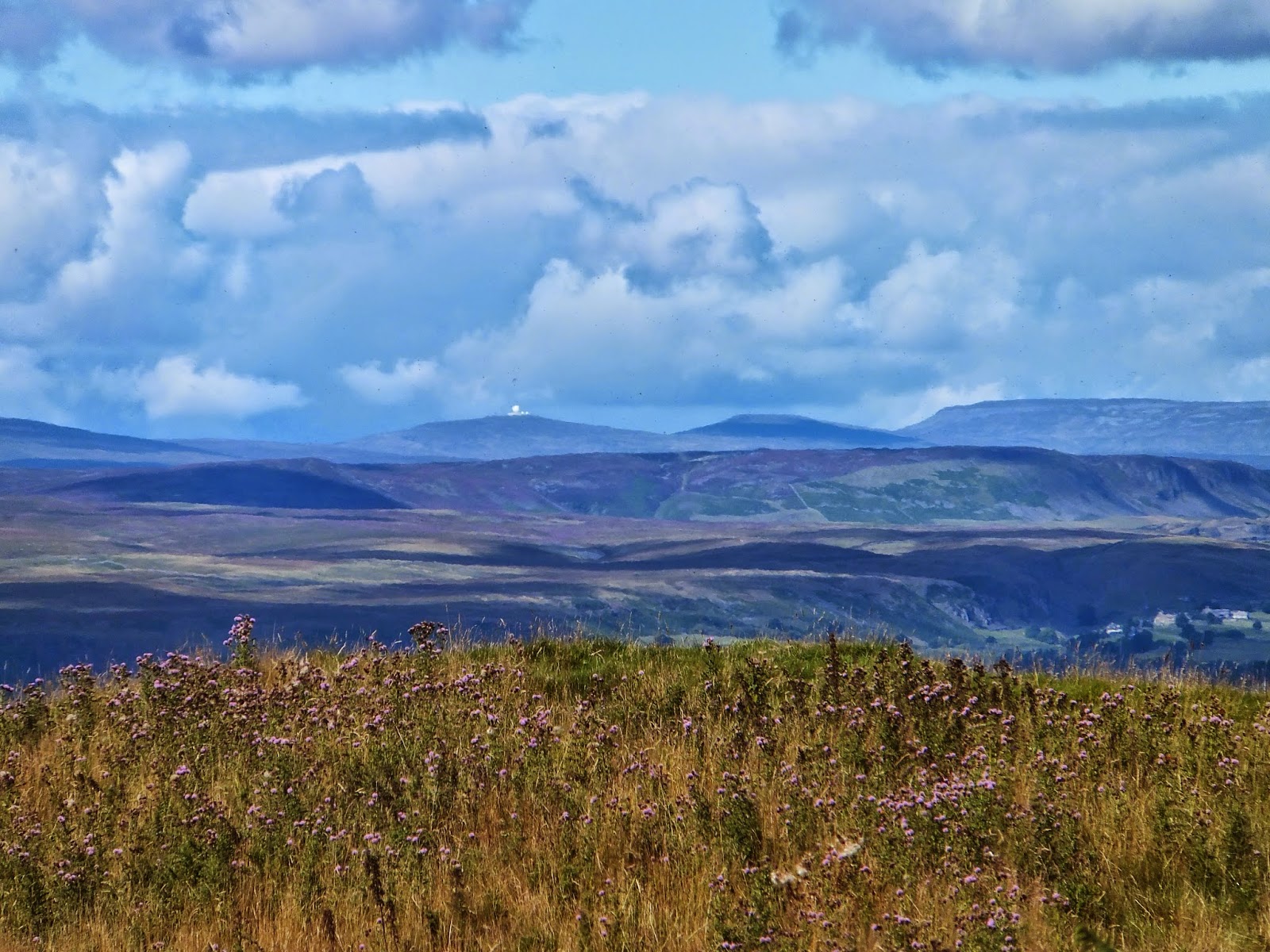 The spine of England stretching away before us.  We stopped and soaked up the views of the Tees Valley and the stunning beauty of England.

In Middleton-in-Teesdale we stopped for some lunch.  There was a quaint little cafe where we bought good quality coffee and deep-filled cheese toasties.

As soon as we left Middleton-in-Teesdale we started the long climb over Bollihope Common.  It wasn’t particularly difficult but was merely a gently rising slope that went on for a long time.  Ahead of us was another cyclist and Dean set off to chase him, while I made a mangled mess of a gear change and dropped to the side of the road.  Looking back down from Bollihope into Teesdale there was still a mass of purple heather everywhere. 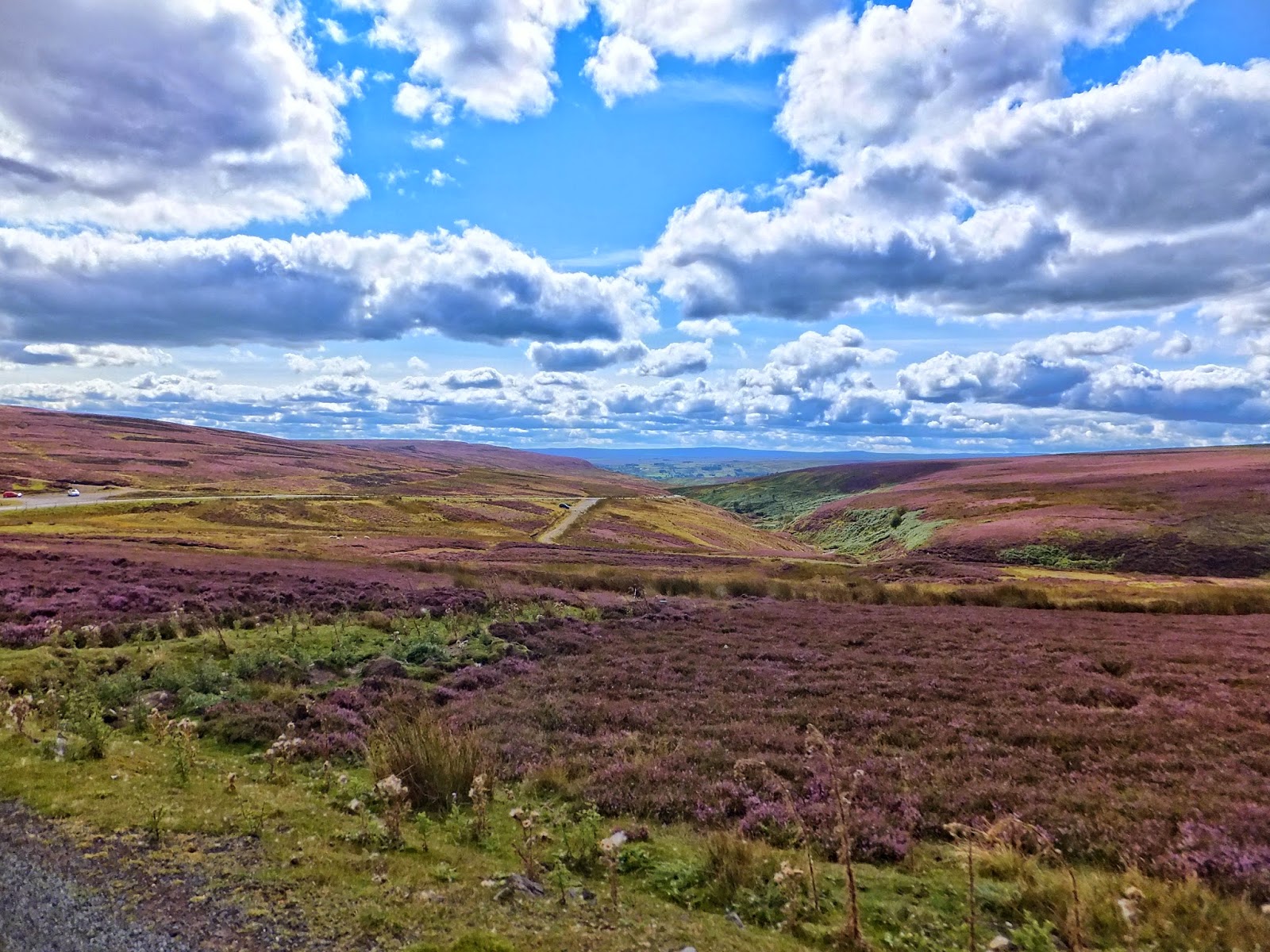 The road over Bollihope has two major climbs, the first from Teesdale, and the second from the little stream called Bollihope Burn.  It is well named, because whichever route I’ve chosen from this stream I have felt a burning sensation in my thighs.  We took the turn towards Frosterly because the descent is much more fun.  The shorter route to Stanhope has a steep drop which has to be taken on the brakes, whereas the longer route, through Frosterly blesses the rider with a long mainly straight road which can be enjoyed at speed.  I certainly enjoyed it, at least until my wheel rims heated up so much my front brakes started to squeal with pain.

We stopped in Stanhope to grab more drinks, and refill our water bottles before taking on the much harder climb of Crawleyside.  I had hoped to see plenty of other cyclists this Bank Holiday weekend, but most of them will have ridden through in the morning from Nenthead or Allenheads.  This was probably just as well, because by the look of me I was really suffering.  I don’t remember suffering as much as I look like in this picture, but I really look bad!  I don’t look anything like the composed smooth cyclists which can be found on the cover of glossy magazines riding nonchalantly up the Alpes.

Given that climbing in the Alpes takes hours, and Crawleyside no more than 20 minutes, I had to remind myself that all the moaning my legs were doing was nonsense.  I quoted Jens to them, shut up legs.  Shut up they did, and then their reward was a 9km breeze downhill, and after a short climb another 7km downhill to Lanchester.  From the top of the moors we realised that we could see the Cheviots to the north, the North Yorkshire Moors to the south, the sea to the east and we’d already seen Cross Fell… our views over almost the whole of the Northeast of England from one short ride.  The air quality had been excellent!

As we approached Durham we spied a little pub and called in for a freshener.  It is perhaps the psychological effect of a long stretch of downhill, but overall I felt the route had been predominantly flat.  I think that we had the easiest run out to Middleton-in-Teesdale and apart from Bollihope and Crawleyside, it had been all downhill from there.  Wonderful really; I might plan this as a flatish 100km Brevet Populair.  At least I ought to let people know that there will be no unnecessary hills.