Giving up on a ride before it starts is known as DNS – did not start.  Not completing a planned bicycle ride is known as DNF – did not finish.  I had two DNS and two DNF moments on this ride; but thankfully ignored them and carried on.  DNS moment one… on the train down to Harrogate to pick up my bike from Spa Cycles:  Snow. Ice. Cold. Grey… of course I’m going to give up before I even start. 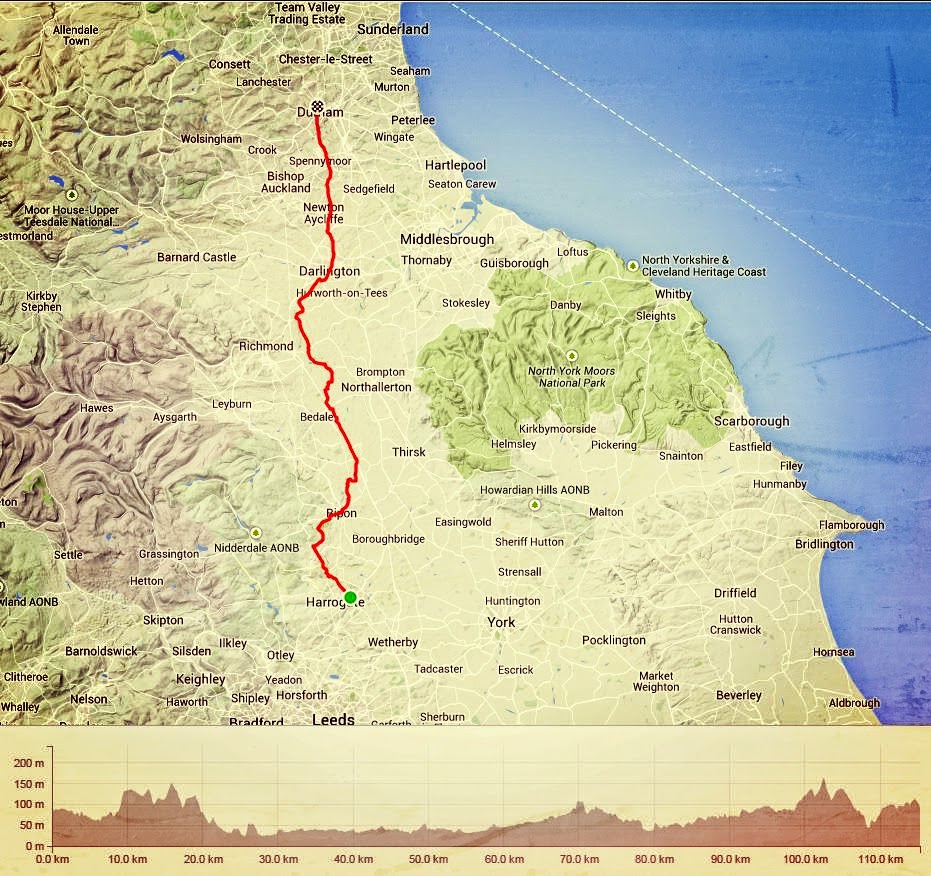 Sing hooray! Last post: the rear derailleur snapped. This post… Spa Cycles have done a wonderful job of restoring the bicycle to full working order.  The story of repair includes a replacement rear derailleur, a new cassette, a new chain, a new set of chain-rings, a new bottom bracket, a replacement headset, a new rear gear cable… Spa Cycles realigned the rear mech hanger. Essentially I had my spring service done and all those little jobs which had been building up over time were addressed while I was down in Harrogate.
To treat myself I had planned to cycle back with my repaired bicycle but my second DNS moment loomed: My nice clean serviced bicycle is soooo clean and sooo nice.  It would be a shame to ride it in the muck, grit, salt, snow and sleet.  I suggested to Mike, my ride partner, that we just bail out. The look on his face said it all… we headed out. Anyway, it is just a bicycle and this was a brilliant opportunity for a nice long bike ride.

Mike led me on the Greenway from Harrogate to Ripley – a straight and level tarmac route which cut out all interaction with traffic and led us out into the countryside towards Bishop Thornton and Fountains Abbey.  The snow was falling thick and fast; it was clear I would DNF as soon as we got to Ripon: I planned to find a train and make my way home in comfort.

We negotiated our way along gritted roads – no worries about ice at all – past St Mary’s church and on the dead straight road through Studley Park.  In Ripon we then called timeout for coffee and cake.  I’d only had porridge for breakfast at 7am – so something refreshing was in order.  With hindsight I should probably have had some cake, not just a small black coffee.  The camera steamed up giving Mike the ‘Peter Jackson’ film effect.

The ride so far had been much better than expected.  I think it is often the case that the fear of the weather is worse than the reality. We parted ways in Ripon; Mike headed back to Harrogate and I ploughed on through the snow northbound for Durham. The snow didn’t really last long, once outside Ripon the skies cleared and the sun came out.  It stayed bitingly cold, but the sun was to my back and gave the impression the weather was warmer than it was.

What a wonderful day it was turning out to be, with crystal clear views of the rolling countryside, white snow covered hills and bright blue sky.  Birds were fluttering along the hedgerow ahead of my front wheel, like dolphins in the bow wave of a boat.

Some of the smaller back roads had not been gritted, but with a little ingenuity I found enough detours to keep going in the right direction.  There was a nice long straight section of service road next to the A1 with a smooth surface, perfect for daydreaming. After Leeming Bar the quiet country lanes kicked in again, but by 2pm I knew my nutrition plan – eating nothing – was a rubbish eating plan. So I stopped at Scorton for refreshments.

The Farmers Arms was open with a roaring log fire; so naturally the refreshments consisted of a pint of Doom Bar and a packet of dry roasted peanuts, followed by a Mars bar for dessert.  They do proper food though, or at least food designed for me!

When my toes were properly warm, and my tummy properly gurgling, I headed back out onto the cold harsh roads of Teesside.  And had a lovely time: there was hardly any traffic all the way to Middleton Tyas and on through to Darlington where I’d planned my final DNF.  I assumed that it was going to take a long time to get to Darlington and that it would be getting dark, therefore justifying a train ride home.  Unfortunately for the train companies I arrived in Darlington just past 3pm, with the sun still shining and the roads still ice-free.  There was only one option really; to follow the A167 all the way home to Durham.

One last nibble of chocolate at the Newton Bar service station just beyond the A1 and I pushed on for home.  The sun was just setting leaving a peach glow in the clouds to my left and I made it home by 4:30pm.  I had done it: Harrogate to Durham on a cold January morning and I had neither DNS or DNF’d this experience.  It has emboldened me too, because I’d started to think I couldn’t do this.  By actually doing it I found fresh confidence in my winter abilities.