A great day out with Ruth, from Darlington out to Middleton-in-Teesdale and back via Barnard Castle with stops for tea, for toasties and for treats. 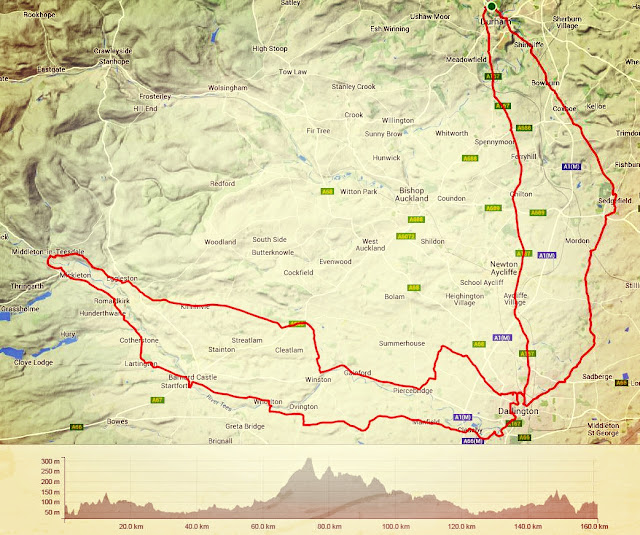 I was meeting Ruth at 10:30am in Darlington, but thanks to having some errands to run didn’t leave Durham until 9am; with 90 minutes in hand I chose to ride fairly hard down through Sedgefield and arrived slightly sweaty and ready for a cold drink.
With the plan being for a hilly ride, I teased Ruth about the Carradice attached to her carbon fibre bike… and persuaded her to bring a smaller saddle-bag and only the bare minimum kit… two inner tubes and two tyre levers. As we left I also suggested that the massive bunch of keys could be left too – just lock up and bring the back door key. 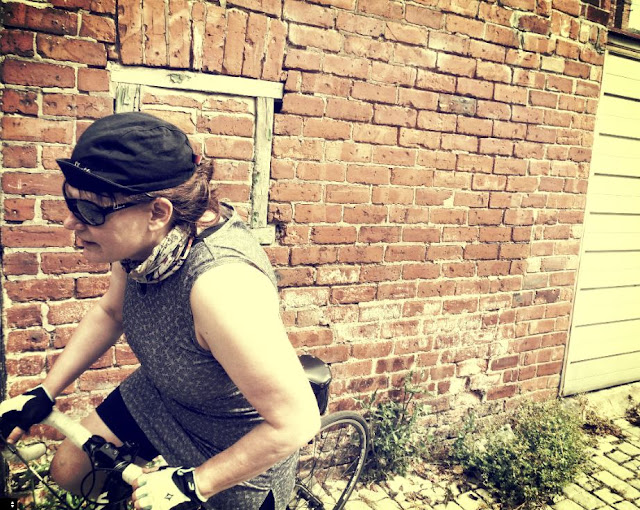 We started with a cobbled classic: The lovely blue cobble-stoned back roads around Darlington out to the little roads leading us away from the town centre. I knew there was resurfacing on the B6279 so took us out via Newton Lane and around Walworth Castle before heading back to rejoin the route we’d planned out. 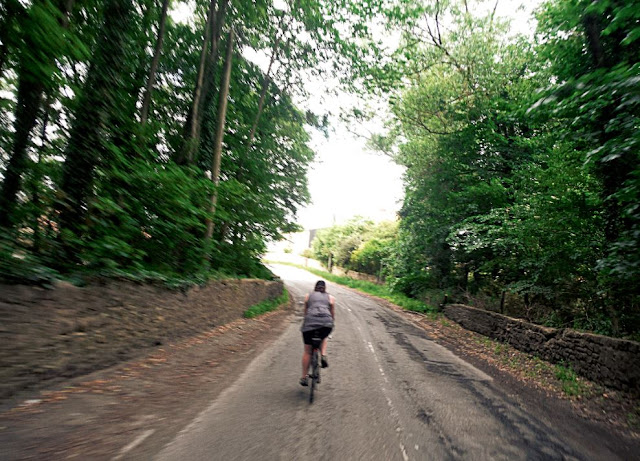 We met a cyclist picking bits of tar and stone from his lovely white bike. He’d ridden through the closed road we’d tried to avoid, and in doing so had picked up the hot tarmac and gravel surface dressing on his tyres and splattered it all over the frame and forks. We didn’t need more warning and headed a bit further south to join the A67. The traffic was light and we were making a nice pace along here, so kept with it through Gainford and down Grant Bank Wood to the B6274 where we again headed north for Staindrop. 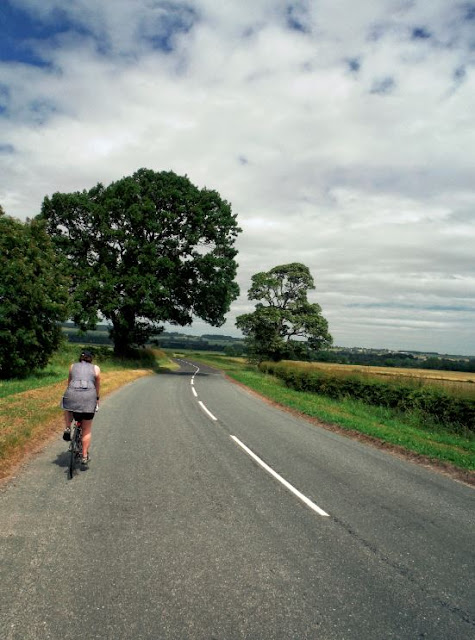 In front of us we could clearly make out Raby Castle and this lovely smooth B-road brought us right into the heart of Staindrop and time for a hot drink at Laurel’s Coffee Shop. 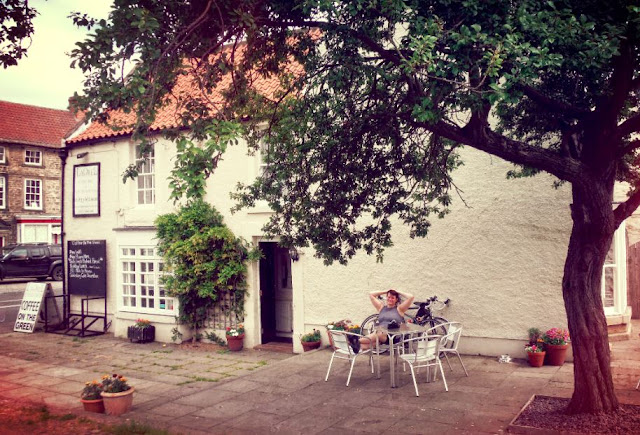 Our ride had been gentle and flat so far, but ahead was the climb to Folly Top. Refreshed with good coffee for me, and a pot of tea for Ruth, we left Staindrop heading west up Teesdale basking in sunshine. The views of the Tees valley are beautiful in early summer; the sides of the dale are a lush dark green. We laughed when we passed “Rogermoor Sheep Farm”, which seemed somehow inappropriate, but the laughing didn’t last long as the climbing gradually got steeper. This is a great road to ride the other way, as the undulations ease and it is possible to keep a fairly high pace from Folly Top all the way to Darlington. I’m not sure Ruth appreciated me pointing out how easy this bicycle ride would be if we were going the other way. I must work on my ability to offer ‘encouragement’ in a less annoying manner. 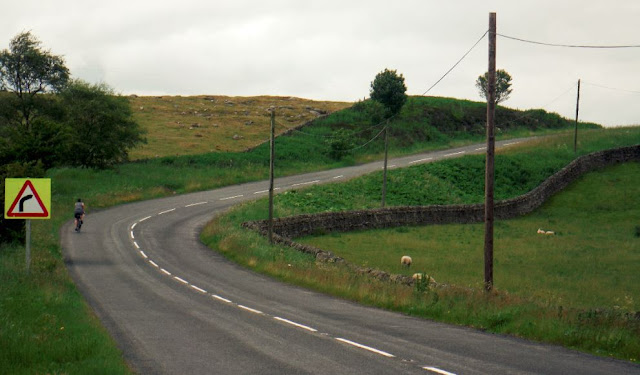 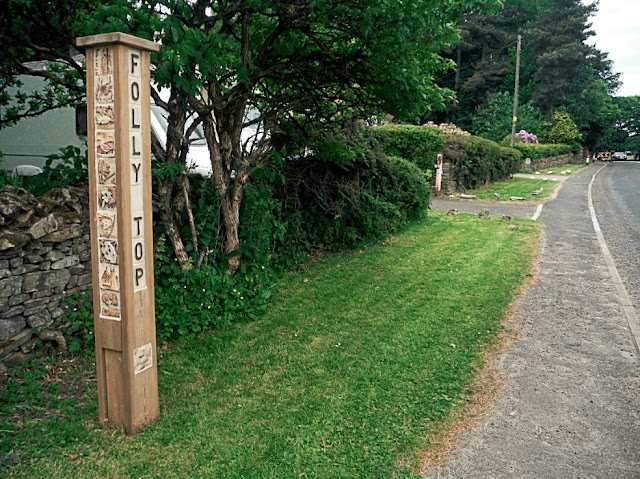 Around the corner is one of my favourite views of the Teesdale Valley, so I slowed on the descent to grab a photograph. I love the way the valley suddenly opens before me as I plummet down Folly Bank. Overhead a fighter pilot in a jet was doing training loops. I waved ‘hello’ numerous times because this pilot just kept circling us. 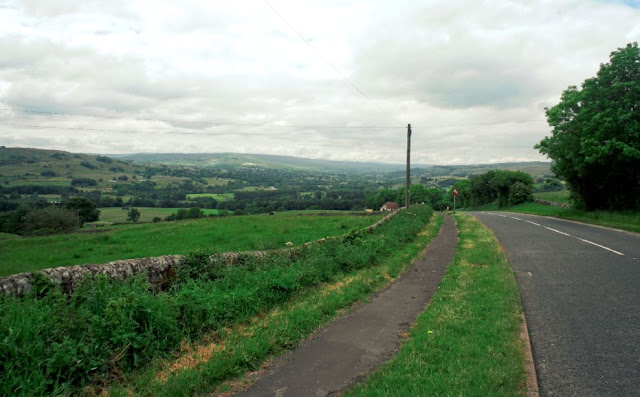 Ruth and I were having an absolutely brilliant ride, chatting about everything and nothing. Ruth has been a long time cycling buddy of mine and Carol’s but we’ve not been able to ride together for ages. I was very happy to be able to spend this day gently touring Teesdale with her, and hope that the tandem will mean Carol and I can enjoy rides like this too. The weather was perfect – slight cloud cover to protect from sunburn, but also warm enough that shorts and short-sleeves was comfortable.

When we reached Middleton-in-Teesdale we stopped for a toasted sandwich each, which Ruth kindly bought for me – thank you very much. There was a retired gentlemen, in Campagnolo cycling clothing, at the same cafe as us. He’d cycled over from Kirkby Stephen through Alston, and was plotting his route back. He was clearly very fit and strong for his age – it does encourage me to see that people who cycle a lot are still fit and healthy as they get older.
We cycled south across the river Tees for the first time, and then followed the B6277 along in sight of the river through Mickleton, Romaldkirk, Cotherstone and Lartington before arriving on the outskirts of Barnard Castle. This road is frequently used on the London-Edinburgh-London Audax passing through villages, each as pretty as the last. The residents make a big effort to keep their gardens looking beautiful. On top of this, there seemed to be a scarecrow competition in Cotherstone, with life-sized straw dolls dressed up in the theme of the Eurovision song contest. I guessed ‘Don’t cry for me Argentina’ easily enough – but some of the others seemed rather obscure. 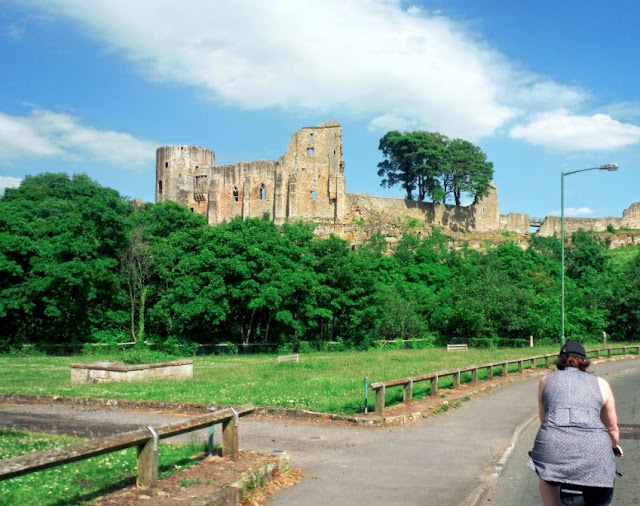 Barnard Castle was our next stop point, for some delicious ice-cream from ‘Shirls Shakes’, a splendid little milk-shake parlour right on the market roundabout. We crossed the river Tees again at the cycling / footbridge and climbed the short distance up The Bank from Thorngate. 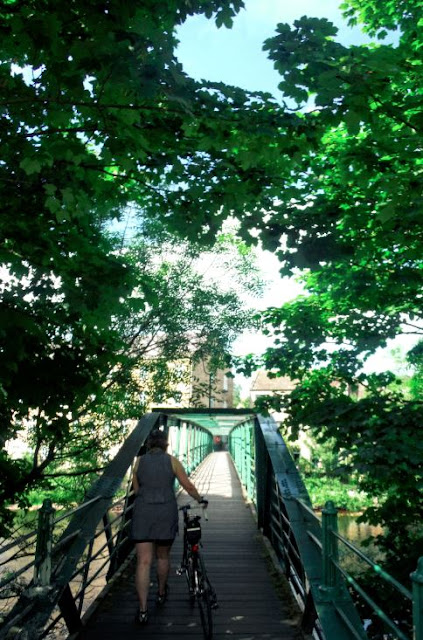 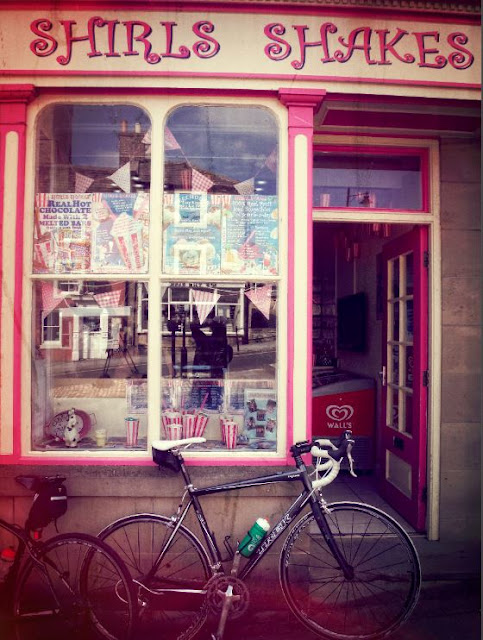 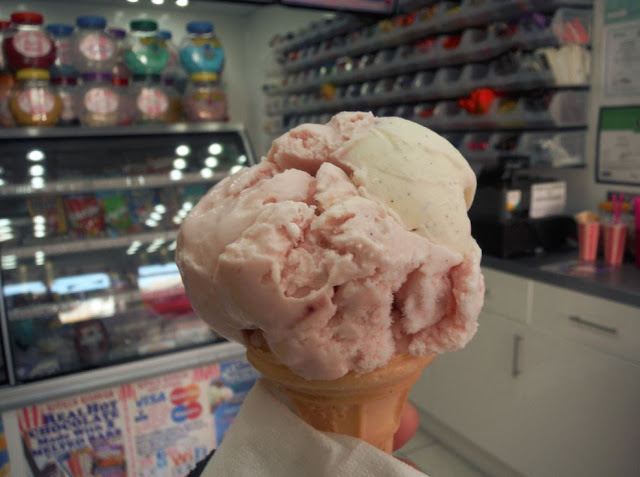 The ice-cream was totally delicious – I had ‘strawberry and cream’, Ruth went for vanilla. Thanks to our cycling exploits we really had earned the calories to enjoy these delights. Leaving Barnard Castle on the Sustrans route 165 (Walney to Wear) we rode along Newgate / Westwick Road and passed Bowes museum – a massive ex-stately home from the 19th century built in the style of a French Château.

We cycled along in the afternoon sunshine, with the cloud cover clearing slightly to reach Whorlton, yet another beautiful little village with a large green opposite the pub. Here there is a narrow iron suspension bridge from the 1830s (Whorlton Bridge) with a weight limit; the road drops steeply down to the river Tees with a proper hairpin bend halfway, before a right angle bend onto the bridge itself. There are pinch points at either end and it is worth taking time to cross as the river is pretty just here. Ruth tells me that Whorlton Lido was a popular tourist spot in the summer, with a miniature railway and public swimming in the river. It had been a popular spot for visitors from Barnard Castle and Darlington for over 100 years until it was closed in 2011 by the new land-owner who is recorded in the Northern Echo as saying the popularity of the site was a nuisance to the village. 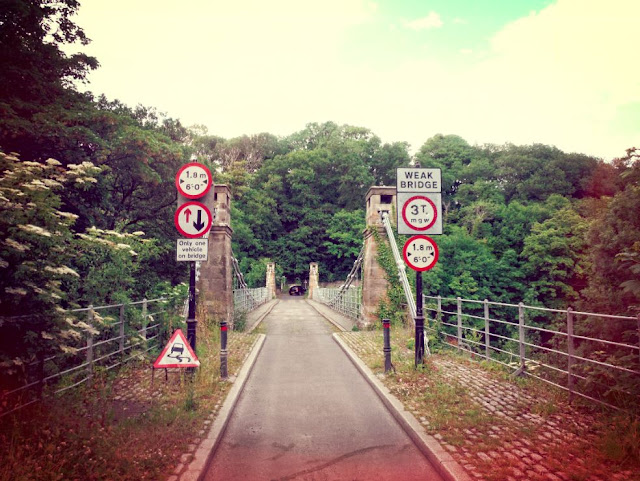 Ruth and I climbed the other side to continue along the W2W route (Sustrans route 165). It was now passing 5pm, but the sun was till high and the skies had become a lovely blue. Our pace dropped slightly as we savoured the last of the pan-flat riding back into Darlington, side-by-side. 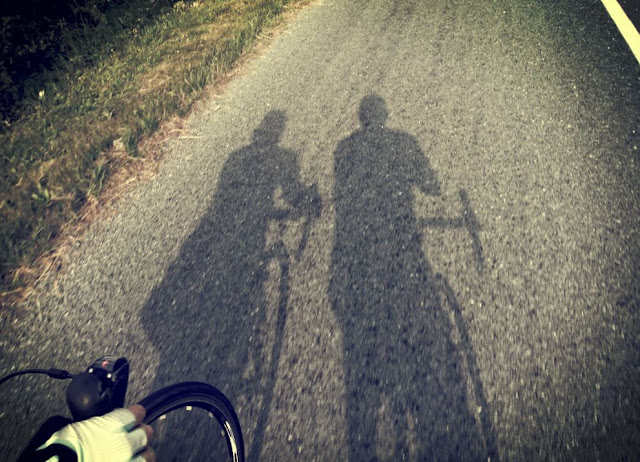 Ruth led the way through Manfield, under the A1(M), through Cleasby, under the A66(M) and left at Stapleton. Our 90km ride of predominantly empty roads was drawing to a close and the busyness of Darlington was around us. We arrived back at about 7pm, still in lovely warm sunshine.

Most rides have a comedy moment or two. Ours came at the very end of this bicycle ride when it dawned on us that we were locked out. Although Ruth had the back door key, the garage-style door to her back garden was locked. So I found myself scaling a 2.5m brick wall and dropping down the other side to open the door from the inside. It was my fault for telling her to leave all the keys at home when we set out earlier, but I stand by my advice to leave the Carradice. I think that if a 40+ old bloke dressed in lyrca can break into Ruth’s back garden, then her security needs updating!

We shared coffee and cold drinks, before I set off back to Durham. With perhaps an hour of light left I decide to simply follow the A167 back from Darlington. Putting a bit of effort in I managed it in under an hour. Carol said there was a strong tailwind. I suggested it might be merely a gentle zephyr.