Cycling up Swaledale, along the Vale of Eden and back down Teesdale: long climbs and never ending descents. The Hartside 200 was a perfect 200km Audax UK ride, organised by Dave of VC167. 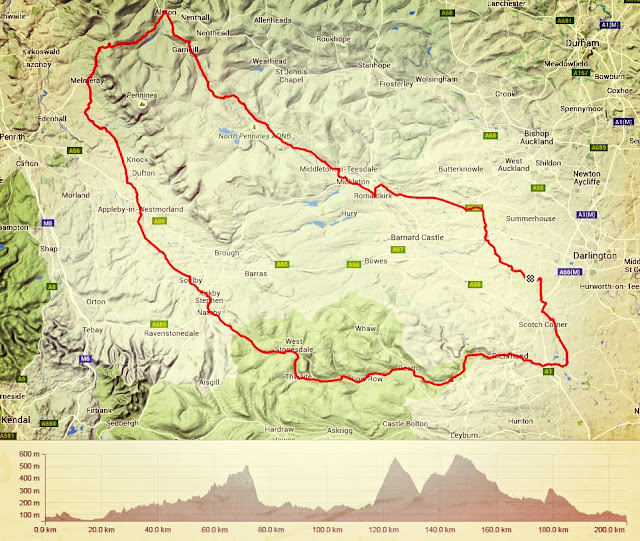 My camera has broken, one of the realities of carrying it in the back pocket of my cycling jersey and using it extensively; as a result I haven’t got many photographs to share with you today.

There were about 30 of us riding out of Aldbrough near Darlington on this bright and sunny morning, down the old Roman Road past Barton Services and under the A1(M) to reach the quiet country lanes around Middleton Tyas and south to Scorton. We stuck together in a fairly fast group this far, but once we turned west started to split up a bit along the road.

I dropped off the back of the group for a ‘comfort call’ at Richmond, and then rode alone out of Richmond and into Swaledale along the B6270. Carol and I, with our friends Ruth and Jonathan, have cycle camped along here. Swaledale is a fairly narrow dale, and the weather can rapidly turn threatening. Although there are loads of little villages along the way it can feel isolated and bleak. However, in today’s sunshine and with only a light headwind it was beautiful. The dark green fields separated by grey stone walls, dotted with stone farmhouses.

In Reeth, Anne and Ulrich were calling into a village shop and shouted out, “Graeme, they sell beer!”, but I wasn’t to be tempted today as I was enjoying riding quite hard and feeling fast. I’d brought my lighter road bike instead of my tourer and the difference in the hills was obvious.

After Muker we experienced a constant stream of MTB riders coming the other way. They were doing the “Rat Race Crossing” and following this 110km route from Shap to Northallerton. It looks like a difficult challenge on knobbly tyres with suspension bicycles. Compared to us 30 ‘Randonneurs’, it just goes to show how popular challenge bicycle rides can be: there were hundreds of riders going the other way!

I’ve never ridden from Muker to Nateby, climbing Birkdale to Birkdale Common. The road undulates up and down, but mainly up and with some short steep sections. It was made easier by the shouts of encouragement from oncoming MTB riders enjoying the downhills. The road is well surfaced but narrow with passing places. It was a shame that the only car I saw was driven by someone who wanted to push past me instead of waiting for a passing place. With a loud bang his rear driver-side tyre blew out; but thankfully uphill and slowly so that no one was hurt.

The reward for cresting Birkdale Common was this view of Cumbria with the associated sweeping descent to Nateby. I enjoyed that, even dealing with cyclists spread across the width of the road grinding uphill towards me. 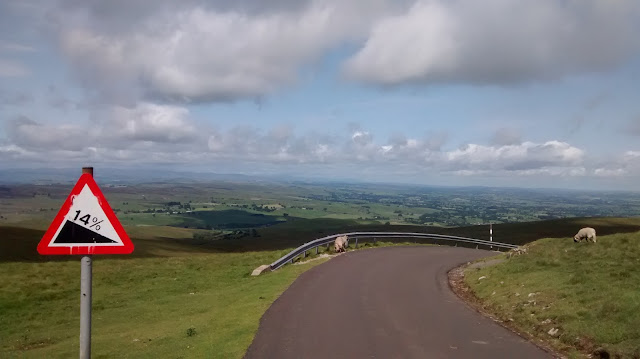 In Kirkby Stephen I met up with Stephen, Jonathan and Paul, so we shared a chatty ride together through Appleby to Melmerby. Jonathan had a ‘Strava climb’ in mind so headed west briefly to find the bottom of the segment before turning round to chase Stephen, Paul and I uphill. Another reward awaited: the second massive descent of the day from Hartside cafe to Alston.

We regrouped at the shops in Alston and after a swift drink I set off again. I was fairly certain that they would catch me on the climb of Yad Moss and I’d rather experience being caught than being dropped. This climb is another long slog of a climb, not steep or hard, but with several false crests so that when I finally saw Teesdale open up before me I was drenched with sweat.

The wind had picked up. It was blustery to say the least, the sensation was similar to that feeling when body-boarding in the sea; when the waves crashes around your middle and buffets you towards the shore. I think a weather front was coming in and as we’d expected rain later in the day I took advantage of the buffeting wind to hurtle down Teesdale to Middleton-in-Teesdale in next to no time.

The only remaining climb of the day was the comparably short Folly Bank – but another long wind-assisted descent awaited from Folly Top to Staindrop. This was turning out to be one of the fastest 200s I’ve ridden. The joy of riding a light bike in the hills, together with the low rolling resistance of hard smooth tyres for the well surfaced roads making the whole bicycle ride feel easier than it ought to.

Back in Aldbrough Dave and Nigel were waiting with tea/coffee/cakes and I tucked in, having completed this ride in under 9 hours. Okay, I know its not a race but having a moving pace of 25.8kph (16mph) for 206km (128 miles) was really satisfying.

Carol texted to say that our evening meal would be ready at 6pm, so I rode back to Darlington and caught the 5:40pm train back to Durham in time for dinner. A grand day out!